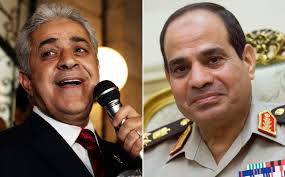 pt, presidential electionEgypt’s election commission said Sunday only two presidential hopefuls, one of them the powerful former military chief who nine months ago ousted the country’s first democratically elected leader, have submitted their papers to run in next month’s polls.

With only two people — former army chief Abdel-Fattah el-Sissi and leftist politician Hamdeen Sabahi — vying for the country’s top post, the race is certain to be dramatically different from Egypt’s 2012 presidential vote, when 13 candidates of all political stripes competed in a heated campaign.

Mohammed Morsi, an Islamist from the Muslim Brotherhood, won that race, defeating a former general in a runoff to become Egypt’s first democratically elected president. Just over a year later, the military removed Morsi from office following mass protests calling for his ouster.

El-Sissi, the man who led the military’s move against Morsi, is riding a wave of popular support and is the clear front-runner in this year’s vote. Since Morsi’s ouster, el-Sissi has achieved a near cult-of-personality. His picture is plastered in posters around the country; songs about the military and him ring out in weddings and private cafes, and he has been hailed in state and private media as a national savior.

El-Sissi’s only rival is Sabahi, a leftist politician who came in third in the 2012 elections after receiving around 5 million votes and largely appealing to Egypt’s secular youth and working class.

Sabahi’s staff has complained of intimidation tactics during the signature collection period and of bias by state officials in favor of el-Sissi. They blamed officials with links to former autocrat Hosni Mubarak.

On Sunday, Sabahi’s office said military troops detained a campaign worker in north Sinai because of his political activities. It was not clear why he was taken into custody. The army is waging a campaign against militants in the restive region.

Some in Egypt have urged Sabahi to withdraw from the race to avoid providing what they say would be a democratic facade to el-Sissi’s likely victory. Ayman Nour, a liberal politician and 2005 presidential candidate who opposed Morsi’s ouster, said he had appealed to Sabahi to withdraw.

“I hope that my friend Sabahi doesn’t become an extra,” Nour told Al-Jazeera Mubasher Misr from Lebanon where he has resided since the summer. “This is farcical theater.”

Over the next two weeks, the election commission will review the documents while also allowing the hopefuls to challenge their rival’s nomination on legal grounds. The campaign officially begins May 2, when the commission will announce a final list of candidates.

The May 26 and 27 presidential elections are pivotal to the post-Morsi political plan, and are to be followed by parliamentary vote. Morsi supporters reject the plan, and continue to hold near daily protests against the military-backed authorities.

Turnout in the vote will be a key test of el-Sissi’s popularity and the ability of Islamists and other critics of the military chief to impact the race— either by boycotting or supporting Sabahi. In the 2012 elections, nearly 50 percent of the voters took part in both rounds. There are 53 million registered voters this year.

Already buffeted by waves of political turmoil since the 2011 ouster of longtime autocrat Hosni Mubarak, Egypt has been wrestling with a surge in political violence since Morsi’s overthrown in July.

Suspected militants, meanwhile, have killed more than 450 police and soldiers in clashes and attacks, the government says.

On Sunday, gunmen killed a police captain and a conscript in a firefight on a desert road outside Cairo, the Interior Ministry said, in the second such attack in three days to target Egypt’s security services.

The two security men were killed early Sunday while taking part in a joint security patrol that tried to stop a suspicious vehicle on the road to the canal city of Suez, the Interior Ministry said. The vehicle’s occupants opened fire before speeding off.

The ministry said Captain Ashraf Badeer al-Qazaz was killed in the firefight, along with a conscript from the central security force. A security official said initial investigation shows the gunmen were driving a four-wheel drive vehicle.

The attack comes two days after a bomb targeting a traffic post in a busy square in Cairo killed a policeman. A militant group that goes by the name of “Ajnad Misr,” or “Egypt’s Soldiers,” claimed responsibility for the blast. The group says it is waging a campaign against police because of the government crackdown on protesters.

Sunday’s attack comes as Egypt’s Orthodox Christians, who make up more than 10 percent of the country’s 85 million, celebrated Easter. Security was boosted around churches as worshippers flocked to them for the Easter Mass. Senior government officials, including the prime minister and the interior minister, paid visits to St. Mark’s Cathedral, the seat of the Coptic pope.