Scotland on brink of independence, Poll 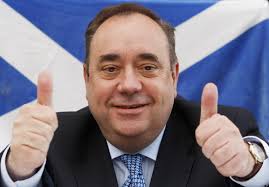 ALEX Salmond is on the brink of securing a historic victory in the referendum, according to an exclusive poll suggesting Yes Scotland needs a swing of just over 2 per cent to win independence.

A landmark ICM survey for today’s Scotland on Sunday reveals a decline in the No vote from 46 per cent to 42 per cent over the past month. Over the same period, the Yes vote has remained steady at 39 per cent, resulting in a significant tightening of the gap between the two sides.

When the 19 per cent “don’t knows” are excluded from the equation, the No vote stands at 52 per cent, with 48 per cent in favour of Scotland going it alone. This is the highest level of Yes support to be recorded by an independently commissioned opinion poll.

Further analysis reveals that the 460,000 people who live in Scotland but were born in England could play a major role in the outcome of the referendum.

According to the survey, the 15 per cent of the 1,004 sample who were born in England are far more likely to vote No than their Scottish-born counterparts.

This contrasts with Scots-born voters who, taken alone, are in favour of independence by 42 per cent to 40 per cent.

The small sample size means some caution is required. But yesterday Professor John Curtice, the Strathclyde University elections expert, acknowledged that the reluctance of English-born voters to embrace independence could prove crucial when votes are cast on 18 September.

“In a tight race, they could yet hold the key to the referendum,” Curtice said. “It is an indication that appealing to the non-Scots-born part of the population is rather more difficult for the Yes side to achieve.

Looking at the responses to the independence question as a whole, Curtice said that today’s survey was the closest seen so far in the referendum campaign, which will heat up this week as both sides launch new poster campaigns in an attempt to win more people to their causes.

“This is another poll showing the No side is in a real battle if it wants to keep Scotland in the Union,” said Curtice. “When the ‘don’t knows’ are excluded, it is the highest Yes vote in a poll that has not been commissioned by a partisan organisation.”

The poll is the latest in a series of surveys that have made worrying reading for the Better Together campaign. This week, Labour will attempt to rejuvenate the No campaign by holding a meeting of its shadow cabinet in Glasgow on Friday.

In what promises to be a big week for Ed Miliband’s party, former prime minister Gordon Brown will speak from a Better Together platform for the first time on Tuesday when he will argue that an independent Scotland would struggle to cover escalating pension costs.

Until now, Brown has only spoken on constitutional matters under a Labour banner. His decision to join the cross-party Better Together will be seen as an attempt to bury his differences with Alistair Darling, the campaign leader.

Critics of Better Together’s strategy have suggested that Labour’s “big beasts”, such as shadow foreign secretary Douglas Alexander and shadow international development secretary Jim Murphy, should do more campaigning for the UK.

By holding its shadow cabinet north of the Border, Labour is signalling that its big players are stepping up their fight for the Union.

All members of Labour’s top team will be out campaigning for a No vote from Inverness to the Borders.

The shadow Scottish secretary, Margaret Curran, said: “This week we will be saying loud and clear that the best prospects for a stronger Scotland lie with Scotland remaining part of the United Kingdom.”

He said: ‘This is another very encouraging poll – the narrowest gap in the campaign so far and a swing of just two points is all that is needed to put Yes ahead, which we are confident of achieving.

“Our latest poster campaign shows that we are stepping up activity further in the months ahead to achieve a Yes vote on 18 September – and deliver a fairer, more prosperous country to benefit everyone who lives here.”

Jenkins added: “The extreme negativity of the No campaign is proving a major turn-off for voters, and month by month they are paying the price.”

Better Together’s campaign director, Blair MacDougall, said he was unsurprised that people born in England were in favour of retaining the Union.

“It’s no surprise that people born elsewhere in the UK now living in Scotland strongly support keeping the UK together.

“With such strong bonds of culture, history and family it’s clear that we are stronger and better together as part of the UK,” MacDougall said.

On the poll’s overall independence finding, MacDougall said: “This poll shows support for leaving the UK at the same level as last month and is just the latest poll to show a majority of Scots want to remain in the UK.

“Whilst it is welcome that there is a majority in favour of keeping the UK together, this poll is a reminder that there can be no complacency from those who believe that the brightest future for Scotland is to remain in the UK.”

He added: “With the launch of our advertising campaign tomorrow and a big grassroots campaign push, we will be fighting hard for every single vote between now and polling day. Everybody who wants to keep Scotland in the UK needs to play their part.”