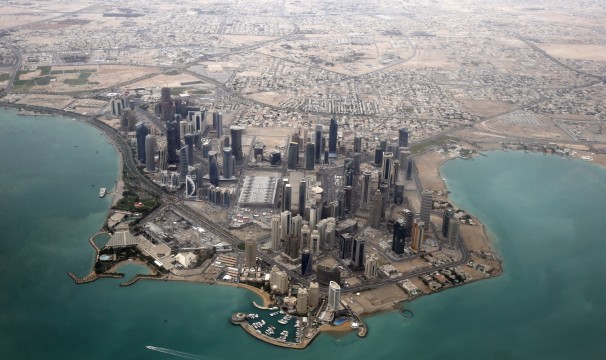 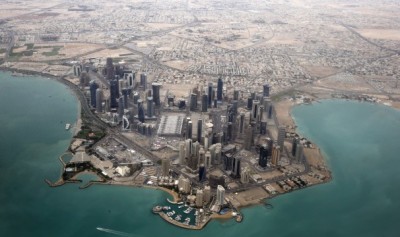 Blazing gas flares 230 feet into the night sky above Qatar’s Ras Laffan Industrial City. The 183-square-mile complex houses the world’s largest assemblage of liquefied natural gas plants and its biggest port for LNG exports. Ras Laffan chills to a fluid more gas in a year than Canada consumes. It then ships it to run electric plants and warm homes from Tokyo to Buenos Aires. The gas facilities within its grounds produce almost a third of the world’s LNG exports.

The government takes every precaution against sabotage. Entry to the Industrial City for those who don’t work there is severely restricted; photography inside the facility is forbidden. Ras Laffan makes Qatar the richest nation in the world, with a per capita income for its citizens of $101,000 in 2012, according to International Monetary Fund data.

The greatest threat to Qatar’s enormous wealth is competition. And other nations are challenging its LNG dominance. Australia is constructing liquefaction plants that will more than triple its annual LNG-manufacturing capacity to 85 million tons by 2018, surpassing Qatar, according to data compiled by Bloomberg Industries.

“The global LNG market is going to loosen, and that has a big impact for the Qataris,” says Trevor Sikorski, a gas, coal and carbon analyst at consulting firm Energy Aspects in London. “Pressure will mount through the rest of this decade. First you have the Australians, and then you have the U.S.”

LNG spot prices in northeast Asia, where Qatar shipped 63 percent of its LNG in 2012, could fall as low as $12 per million British thermal units by 2016 as new supply enters the market, Sikorski says. They climbed to a record $19.70 in February, according to the New York-based Energy Intelligence Group’s World Gas Intelligence publication.

Qatar faces diminished market share and the possibility of lower prices just as the country embarks on $200 billion of infrastructure spending before hosting the 2022 soccer World Cup. Gross domestic product growth is projected to slow to an average of 6.3 percent in the next five years after increasing an average of 11 percent annually for the five years ended in 2013, according to the IMF.

Qatar’s response is typical of its free-spending government: Sheik Tamim Bin Hamad al-Thani, the emirate’s ruler, is buying up the competition. Qatar Petroleum International, the state energy company’s foreign investment unit, has bought stakes in gas and oil fields in Brazil, Canada and the Republic of Congo since April 2013.

QPI owns a 70 percent stake in Houston-based Golden Pass Products, a joint venture with Exxon Mobil that operates an LNG import terminal in Sabine Pass, Tex. QPI is seeking final permission from the Energy Department to add an export terminal to the existing import terminal.

In addition, Qatar Holding, the foreign investment arm of the sovereign wealth fund, has taken stakes in Royal Dutch Shell and France’s Total, both of which operate LNG plants around the world.

“We are capitalizing on our experiences and successes as the biggest LNG producer and exporter,” Qatari Energy Minister Mohammed bin Saleh Al Sada wrote in a February e-mail. “It is natural that we expand our LNG business to cover other parts of the world, including the United States.”

Al Sada says the surge in gas production around the globe just proves there is great demand for Qatar’s main export. He says it is evidence that natural gas “will have a bigger share in the world’s overall energy mix; this is advantageous.”

Forty years ago, Qatar was a petroleum backwater compared with its Persian Gulf neighbors Kuwait, Saudi Arabia and the United Arab Emirates. Its transformation began in 1971, when Shell discovered Qatar’s North Field, the world’s largest gas reservoir. Little was done to develop the field until the country completed its first LNG plants at Ras Laffan in 1996 in partnership with Mobil.

During the next 15 years, 14 LNG plants were built, all of them in partnership with Western petroleum companies. The plants are capable of producing a total of 77 million tons of the fuel each year. Proceeds from gas exports have given Qatar the highest per capita GDP in the world, 29 percent higher than No. 2 Luxembourg.

Shell left Qatar in the early 1990s amid low oil prices and returned in 2002. It spent $21 billion building an LNG plant at Ras Laffan and another facility called the Pearl, which is the world’s largest gas-to-liquids plant. The Pearl plant turns natural gas into 140,000 barrels a day of liquid fuels that would normally be made in an oil refinery, including kerosene for jet fuel and base oil, which is used to make motor oil for autos.

“There is probably no other country in the world where it could have happened that Shell would have had the confidence to invest $21 billion of its own cash,” says Rob Sherwin, Shell’s deputy country chairman. “It has become, in just a decade, a new heartland for Shell.”

The Qatari government has put a moratorium on further development of the North Field so it can assess ways to maintain output levels and has suspended construction of new LNG plants. That creates an opening for competing nations.

In Australia, London-based BG is scheduled to start up its Queensland LNG export plant in the fourth quarter, while Adelaide-based Santos and Sydney-based Origin Energy are set to launch plants next year. San Ramon, Calif.–based Chevron and ConocoPhillips are also building LNG export facilities, as is Texas gas producer Cheniere.

The current gas exporters see that their world is changing. The United States’ new ability to produce gas by cracking underground shale deposits is a “game changer” for the industry, says Mohammad Hossein Adeli, secretary-general of the 13-nation, Doha-based Gas Exporting Countries Forum.

U.S. exports are a particular challenge because their price won’t necessarily follow a longtime convention that links LNG tariffs to the price of oil, says Thierry Bros, a gas analyst at Paris-based bank Societe Generale. Under the arrangement, Japan bought LNG for an average of $16.06 per million BTUs in 2013, according to LNG Japan. U.S. gas futures, meanwhile, traded at an average of $3.73.

The cost of liquefaction, shipping to Asia and turning LNG back into gas will add $6 to $8 per million BTUs to the price of the U.S. gas, according to an April 2013 report by NERA Economic Consulting. That’s still a bargain for Japanese and other Asian importers.

With the U.S. LNG exports looming, “Japanese and other Asian companies do not want to pay oil-indexation” prices for the gas any longer, Bros says. “Qatar will have to adapt.”

The full version of this Bloomberg Markets article appears in the magazine’s May issue.

More from Sunday Business: Prepared to go for the dream school — at any cost — Michelle Singletary’s daughter got an early lesson in economics. As medical providers consolidate, questions about effects on costs, quality of care Singletary: The bottom line when picking a university: No debt allowed Ritholtz: What’s gone up, won’t always come down Case in Point: Mimicking nature to cut carbon dioxide emissions.

Photo: The diplomatic area of Qatar’s capital, Doha. Liquid natural gas has helped make Qatar the richest nation in the world, with a per capita income for its citizens of $101,000 in 2012, according to International Monetary Fund data. Fadi Al-Assaad/Reuters