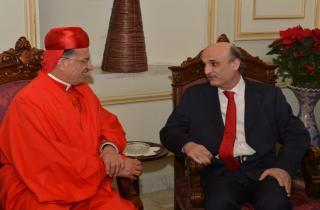 Maronite Patriarch Beshara al-Rai said during his Easter address that the the entire world is watching the parliament and hopes the MPs will meet the necessary quorum needed to elect a new president.

“The entire world is watching the parliament and hopes that the MPs will meet the necessary quorum,” the patriarch noted.

He also called for electing a responsible president who is best suited for Lebanon.

“We hope for the election of a responsible president, who is chosen through the necessary consultations.” he said

“Lawmakers should exercise the duty, bestowed upon them by the people, to elect a president who is best suited for Lebanon,” he stressed.

“We urge cabinet and parliament to exercise their political duties,” Rai said, hoping that the new president will be up to the challenges facing Lebanon.

“The new reality requires the preservation of the state and its people through meeting their needs,” remarked the patriarch.

Rai also stressed the need to introduce reform and safeguard the state institutions, which will create stability in Lebanon

Rai called and congratulated on Thursday Lebanese Forces leader Samir Geagea on the announcement of his candidacy and his presidential platform. He also thanked him for sending a delegation to hand him a copy of his program in which he is stressing a “strong Republic”.

Geagea announced on Wednesday his presidential program that focused on restoring the authority of the state against the proliferation of weapons during a time of regional unrest.

He is the only politician to has officially announced his candidacy for the elections , which are set to be held on April 23.