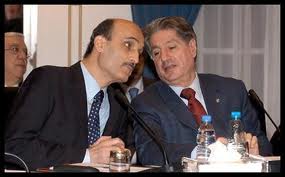 The Lebanese Forces and the Phalange party are attempting to reach consensus over a single March 14 presidential candidate to preserve the coalition’s unity, after several party officials close to Amin Gemayel hinted that the former president might soon announce his candidacy for office, LBCI television reported on Friday.

MP Geagea telephoned Gemayel right after the LF leader announced his presidency, asking for an appointment to coordinate in matters related to the presidential vote, according to MTV.

But later, LBCI noted that the party’s chief, Samir Geagea and not MP Sethrida Geagea, was the person in contact with Phalange officials.

Future Movement MP Ahmad Fatfat told al-Arabiya on Friday afternoon that Geagea has introduced “a new approach of political work in Lebanon and a new aspect of democracy by openly announcing his candidacy.”

“This is because the tradition before was having under-the-table negotiations,” he said.

He also remarked that March 14 will reveal its candidate for presidency after Gemayel takes a final decision on his nomination.

“But reports said contacts are underway between LF and Phalange over this matter and we think that this is a positive sign,” the Fatfat said.

In a related development, MTV said that an LF delegation will visit Free Patriotic Movement leader MP Michel Aoun in the coming hours to hand him over Geagea’s presidential program, and to discuss the upcoming elections with him.

“We will request an appointment to meet with Hezbollah officials as well but we are not sure they will respond positively . But we have to do what we have to do,” LF sources told MTV.

Kataeb MP Elie Marouni assured on Thursday that Gemayel is a “natural candidate in the presidential race, because the party sees in him a strong and popular president.”

Labor Minister Sejaan Qazzi, who’s Gemayel’s adviser, announced as well that the Gemaye is preparing to announce his candidacy.

“Gemayel is a natural candidate for presidency. He is a de facto nominee and he doesn’t need an electoral program,” Qazzi told al-Jadeed television.

Lebanon Speaker Nabih Berri sounded skeptical over the parliamentary session set to elect a president will be held, pointing out that the conditions to ensure its success are “not ripe yet “and expressed his hope that former PM Saad Hariri will attend the session, according to a report by As Safir newspaper on Friday.

“At this point in time the conditions may not be ripe , but that does not mean that they will not be (ripe) before next Wednesday.” Berri said.

The speaker had called on the MPs to meet at the parliament on April 23 to elect a new president to replace Michel Suleiman.

Berri has stipulated that any candidate must secure two-thirds of votes to win in the first round of elections and half-plus-one or 65 votes of the 128-member parliament to win in the second round.