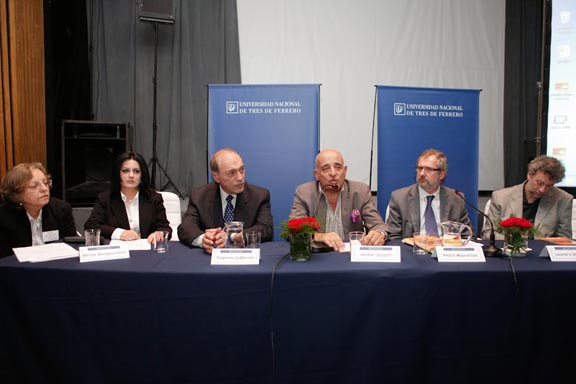 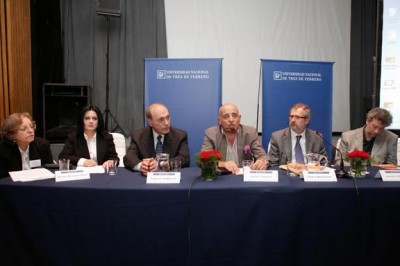 The opening day featured important speakers like Chancellor of UNTREF Anibal Jozami, Director of the National Institute Against Discrimination, Xenophobia and Racism Pedro Mouratian, Minister of the Supreme Court of Justice Eugenio Zaffaroni, President of the General Audit Office Leandro Despouy, and Director of the Center for Genocide Studies Daniel Feierstein, along with Nelida Bulgourdjian, coordinator of the Congress.

Anibal Jozami spoke about memory as a tool to “rebuild social bonds” after a genocide, while Leandro Despouy recalled his work in 1985 to promote the recognition of the Armenian Genocide at the United Nations. Dr. Eugenio Zaffaroni talked about the historical context of the genocide, saying, “When the Armenians were left alone, no one defended them because it did not suit the interests of any of the powers at that time.”

“Too often, gruesome crimes against humanity are ignored because it is simply convenient to forget,” he continued. “Even the very definition of genocide, a petty definition — carefully trimmed to keep out neo-colonialist genocides, Hiroshima and Nagasaki, or the displacements organized by Stalin — is almost like a caricature of the Nazi Holocaust.”

The panel of historians featuring Dr. Richard Hovannisian, moderated by San Andres University professor Khatchik Der Ghougassian, began by making a distinction between the official documents that the Turkish government used as evidence that there was no genocidal plan, and the secret documents that contained the real genocidal orders. “One of the factors of genocide is creating false documents,” he explained. “Denial is not the ‘last phase of genocide,’” said Hovannisian, “It is the first.” Finally, he explained the current state of the Turkish denialist strategy for the centennial anniversary: to present 2015 as the anniversary of the Gallipoli resistance and not as the anniversary of the Armenian Genocide. In this context, he stressed the importance of Turkish historians who study genocide, who will rebuild the “micro-histories” that occurred between the killings.

Gabriel Sivinian, from the University of Buenos Aires, made a historical overview of the context and the structural causes that allowed the ruling class to carry out the genocide, drawing a parallel with other genocides. Historian Heitor Loureiro told the story of the Armenian community in Brazil, reconstructed from various sources, as well as the struggles of the community immediately after the genocide. Naira Meliksetyan, from the Institute of the Armenian Genocide Museum in Yerevan, analyzed the laws dictating deportations of Armenians during the Armenian Genocide and explained how deportation was implemented before the law was adopted, proof that there was a pre-genocidal plan.

Teachers Julieta Puppo and Veronica Kovacic talked about the novel “The Forty Days of Musa Dagh” by Franz Werfel. Maria Florencia Di Matteo and Greta Kalaidjian from the FLH talked about their classroom experience with these issues. The CAN’s Carolina Karagueuzian presented the educational project “From One 24 to Another 24,” which addresses the prospect of teaching the Armenian genocide in parallel with the genocide carried out by Argentina’s last military dictatorship, which began on March 24, 1976.

David Gaunt, from the University of Södertörn, Sweden, recounted the experience of the genocide against the Assyrians, parallel to the Armenian Genocide, emphasizing the need for further work on the issue and suggesting that they could follow the steps of Armenians and ask for their help to develop these studies.

Alexis Papazian and Federico Gaitan Hairabedian, both from the FLH, spoke about the genocide of the native people on Argentina and the ruling “Perinçek v. Switzerland” respectively, while Juan Karagueuzian, from the CNA, presented the film “Grandma’s Tattoos” by Suzanne Khardalian to discuss gender issues in the genocide.

Subsequently, historian Juan Pablo Artinian described the various forms of resistance of discourses and representations, while Dr. Carlos Antaramian introduced the method currently used by Azerbaijan in Mexico to encourage the denial of the Armenian Genocide, as a new method to present the victims as victimizers. Finally, Mehmet Polatel, from Bogaziçi University in Turkey, presented a detailed report on property confiscated by the Turkish state and individuals, that was appropriated from the victims of the Armenian Genocide.