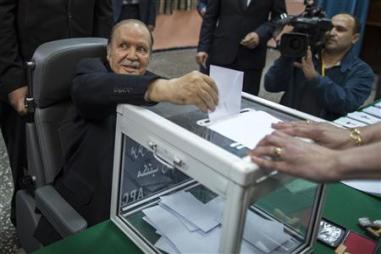 eAlgerian officials say President Abdelaziz Bouteflika has won a fourth term in office with a landslide 81.53 percent of the vote.

His chief opponent, Ali Benflis, already criticized the election as marked by “fraud on a massive scale” after polls closed Thursday.

The results announced Friday by Interior Minister Taieb Belaiz comes after a three-week election campaign that saw a spirited effort by Benflis and his supporters. He has vowed to contest the results.

Official figures for turnout were 51.7 percent, down from the 75 percent turnout for Bouteflika’s last win in 2009. The figures have been described by activists and opposition politicians as inflated.

Since suffering from a stroke last year, there have been concerns about the president’s ability to run this key energy supplier for Europe.