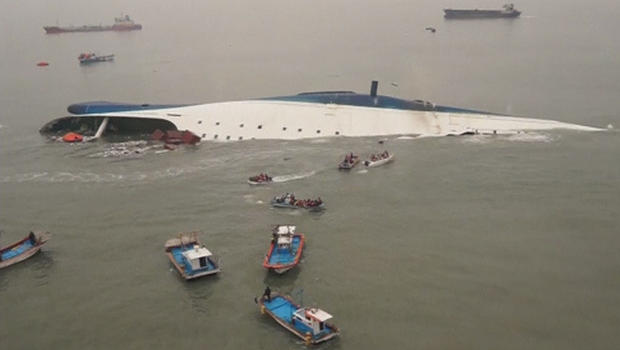 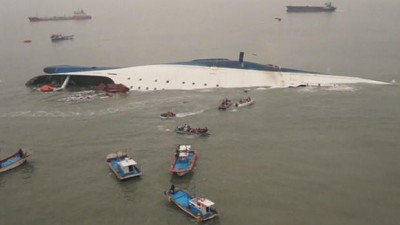 Fears rose Thursday for the fate of 289 passengers still missing more than 24 hours after their ferry flipped onto its side and filled with water off the southern coast of South Korea.

A coast guard official said the death toll was now confirmed at seven, but that is expected to rise sharply because the missing have now spent more than a day either trapped in the ferry or in the cold seawater.

There were 475 people aboard – many of them high school students on a class trip – and frantic parents have gathered at their school near Seoul and in Mokpo in the south of the country, not far from where the ferry slipped beneath the surface until only the blue-tipped, forward edge of the keel was visible.

Divers, helicopters and boats continued their search Thursday for survivors, but the high number of people unaccounted for – possibly trapped in the ship or floating in the chilly water nearby – raised fears that the death toll could increase drastically.

South Korean news outlets reported that many of the passengers sent text messages to loved ones as they awaited rescue, fearing they would not make it out alive.

“Mom, I’m sending you this now because I am afraid I might not be able to say it later. I love you,” wrote one high school student in a text translated by Duk Han Lee of CBCNews.ca. That student was reportedly rescued.

Another student messaged members of his theater club, saying, “Looks like we are really gonna die.”

“If I’ve wronged any of you, forgive me. Love you guys,” wrote the student, whose fate is unknown.

Coast guard spokesman Cho Man-yong said Thursday morning that rescuers in a vessel had found another body floating in the sea, raising the confirmed death toll to seven..

It was still unknown why the ferry sank. CBS News’ Seth Doane reported that many survivors said they heard a loud crash before the ship began to tilt badly. Coast guard officials were interviewing the captain and crew.

The Sewol, a 480-foot vessel that can hold more than 900 people, set sail Tuesday from Incheon, in northwestern South Korea, on an overnight, 14-hour journey to the tourist island of Jeju.

The ferry was three hours from its destination when it sent a distress call after it began listing to one side, according to the Ministry of Security and Public Administration.

Passenger Kim Seong-mok told broadcaster YTN that after having breakfast, he felt the ferry tilt and then heard it crash into something. He said he was certain that many people were trapped inside the ferry as water rushed in and the severe tilt of the vessel kept them from reaching the exits.

Rescued passenger Koo Bonn-hee, 36, said many people were trapped inside by windows that were too hard to break.

“The rescue wasn’t done well. We were wearing life jackets. We had time,” Koo, who was on a business trip to Jeju with a co-worker, said from a hospital bed in Mokpo, the nearest major city to the site of the accident, where he was treated for minor injuries. “If people had jumped into the water … they could have been rescued. But we were told not to go out.”

Oh Yong-seok, a 58-year-old crew member who escaped with about a dozen others, including the captain, told The Associated Press that rescue efforts were hampered by the ferry’s severe tilt.

“We couldn’t even move one step. The slope was too big,” Oh said.

The Sewol’s wreckage is in waters a little north of Byeongpung Island, which is not far from the mainland and about 290 miles from Seoul.

“We cannot give up,” said South Korean President Park Geun-hye, after a briefing in Seoul. “We have to do our best to rescue even one passenger.”

White House spokesman Jay Carney said the U.S. and its 7th Fleet stood ready to assist, including the USS Bonhomme Richard, which was in the region.

The last major ferry disaster in South Korea was in 1993, when 292 people were killed.

TV stations broadcast live pictures Wednesday of the listing Sewol as passengers clambered over the side, jumped into the sea or were hoisted up by helicopters. At least 87 vessels and 18 aircraft swarmed around the stricken ferry.

The water temperature in the area was about 54 degrees Fahrenheit, cold enough to cause signs of hypothermia after about 1 1/2 hours of exposure, according to an emergency official who spoke on condition of anonymity because department rules did not allow talking to the media.

Lee Gyeong-og, a vice minister for the Public Administration and Security Ministry, said the ocean was 121 feet deep in the area.

The survivors – wet, stunned and many without shoes – were brought to nearby Jindo Island, where medical teams wrapped them in pink blankets and checked for injuries before taking them to a cavernous gymnasium.

As the search dragged on, families of the missing gathered at a nearby dock, some crying and holding each other. Boats circled the sunken ferry into the night, illuminated by red flares.

Angry shouts could be heard when Prime Minister Chung Hong-won visited a shelter where relatives of the missing passengers waited for news. Some yelled that the government should have sent more divers to search the wreckage.

The numbers of passengers, as well as the dead and missing, fluctuated throughout the day. As of early Thursday, South Korean authorities estimated 475 people were on the ferry.

Of that total, there were 325 students and 15 teachers from Danwon High School in Ansan, a city near Seoul. They were headed to Jeju for a four-day trip, according to a relief team set up by Gyeonggi province.

Authorities said the dead included a female member of the crew and two male students. Details on the others were not immediately known. Kang Byung-kyu, a government minister, said 55 people were injured. Coast guard officials put the number of survivors early Thursday at 179.

Many South Korean high schools organize trips for first- or second-year students, and Jeju is a popular destination. The students on the ferry were in their second year, which would make most of them 16 or 17.

At Danwon High School, students were sent home early and parents gathered for news about their children. Park Ji-hee, a first-year student, said she saw about a dozen parents crying at the school entrance.

The Sewol, which travelled twice a week between Incheon and Jeju, was built in Japan in 1994 and could carry a maximum of 921 people, 180 vehicles and 152 shipping containers, according to the Yonhap news agency.