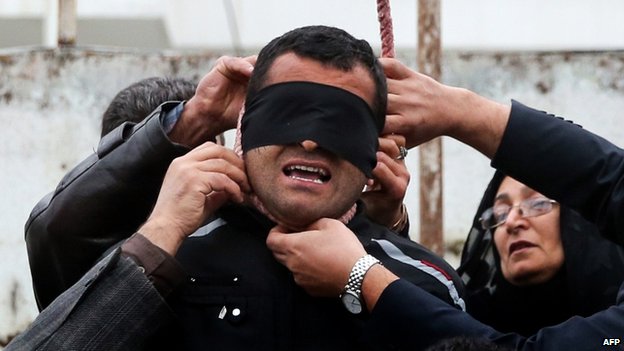 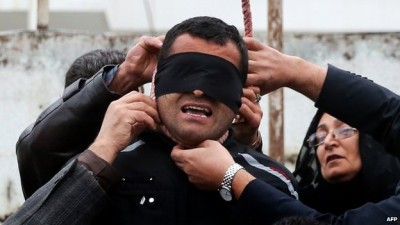 It is Wednesday, early in the morning. Balal is walking to the gallows to face execution in the city of Nour, in northern Iran.

It is before sunrise but hundreds of people have gathered near the prison to watch it.

His mother and sisters are crying hard, but blindfolded Balal cannot see them as he steps on the wooden stool.

Some in the crowd start shouting “forgive him, forgive him”. They are asking the family of the victim to pardon him.

Balal stabbed Abdollah Hosseinzadeh to death seven years ago in a street fight. He was 19 at the time, Abdollah was 17.

The guards put the rope around Balal’s neck. Now he cries hard.

As the dramatic scenes – captured in photographs by onlookers – unfold, the mother of Abdollah goes towards Balal and slaps him in the face.

Then, in front of the surprised crowd, she takes the rope from around his neck. She has forgiven her son’s killer, sparing his life. Now even the police officers start crying.

The mother says she had a dream that her deceased son had asked her not to take revenge.

Campaign
According to Iran’s sharia laws, murder and several other crimes are punishable by death. But the victim’s family has the right to spare a convict’s life in return for ‘blood money’.

For months, many Iranian celebrities had taken part in a campaign to save Balal’s life. They started collecting money to pay compensation to the relatives.

Adel Ferdosipour, a famous television sports presenter, raised the issue in his popular show just days before the execution.

He called on people to ask Abdollah Hosseinzadeh’s parents to pardon Balal. One million people texted the show and supported the campaign.

Ghani Hosseinzadeh, Abdollah’s father, used to be a football player and many Iranian footballers called him in person.

He and his wife finally agreed to forgive Balal. They said they would build a football school under their son’s name using the compensation collected.

Eye for an eye
But not all the people on death row in Iran have been as lucky as Balal.

Behnoud Shojaee was executed in Evin prison in 2009 when he was 21, although many Iranian actresses and actors started a campaign to save his life.

Behnoud was found guilty of killing a boy when he was 17 and the family of the victim refused to pardon him.

Iran is said to have the second highest number of executions of any country in the world.

Public execution is common as the government believes it sets an example.

Iranian lawyer Afrouz Maghzi blames the high number of executions on the legal concept of “qisas” – a law based on the principle of “an eye for an eye” that gives victims the right to retaliate.

“Iran’s law gives the family of the victim this right to kill another person.

“Everyone has the right to life, and no citizen should be given this permission to take it from another person.”

After saving Balal’s life, Iranian campaigners are hopeful they will be able to save more.

Attentions are now focused on the case of Reyhaneh Jabbari, who is currently on death row. She killed a man in 2007 and claims she acted in self-defence after a sexual assault.

Even Asghar Farhadi, the Oscar-winning Iranian director, asked the victim’s family to forgive the 26-year-old woman in the name of “humanity”.

In his letter, the director – whose titles include A Separation – said Reyhaneh had played a short role in one of his films when she was a child.

This week Ahmed Shaheed, the UN’s Special Rapporteur on the situation of human rights in Iran, urged the country to stop Reyhaneh’s planned execution.

He also published a report on 13 March, which condemned the execution of juveniles in Iran as well as the use of capital punishment for offences that do not classify as serious crimes under international law.

Balal and Reyhaneh’s cases have provoked widespread debate in the country – especially on social media – about the use of capital punishment.

Iranian journalist Siamak Bahari praised the pardon of Balal in his blog, describing society as more united and “ready to pose new challenges against the death penalty”.

He called the campaign “a historic decision by society against a system that was born with a noose”.

Tahmineh Milani, a renowned Iranian filmmaker, has for years been donating money from her movies to victims’ families as blood money in order to spare killers.

She told BBC Persian she also believes campaigners’ success in Balal’s case can lead to a change in the law.

“People should take their influence seriously, as each signature can change the destiny of a person,” she said.

Top photo:Victim’s mother removed the noose from around his neck with the help of her husband