Marathon highlights severe lack of freedom of movement for Palestinians 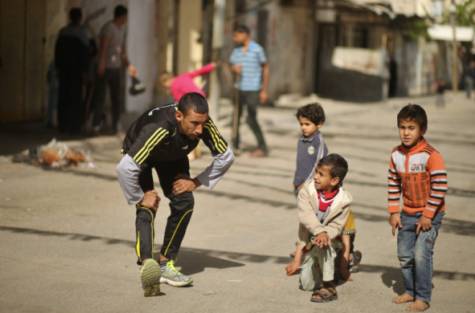 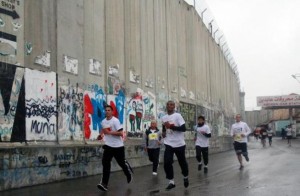 Bethlehem’s second annual marathon was underway early Friday, with some 3,500 participants from Palestine and around the world participating.

However Palestine’s hometown hero, Gaza runner and Olympian Nadir Al-Masri, was denied entry to the West Bank to compete in the marathon.

As a boy growing up in this town close to the border with Israel, Al Masri was the neighbourhood champion of Catch Me if You Can.

“No one could catch me,” he recalled. After soccer matches, he would do laps around the empty field.

Al Masri took up distance running as a teenager, and in 1999, his fleet feet took him on his first airplane: to Belfast, Northern Ireland, where he was shocked by the snowy cold and finished near the back of the pack in an 8-kilometer race.

He has since competed internationally more than 40 times across Europe, Asia and the Arab world, and he carried the Palestinian flag at the 2008 Beijing Olympics, where he ran 5,000 meters in 14 minutes 41 seconds.

Back home, he has won the only two marathons that have been held in Gaza, on a course that stretched from tip to toe of this crowded coastal enclave.

But Al Masri now seems to have run into a roadblock: The Israeli government refused to let him travel through Israel to Bethlehem, in the West Bank, to compete in the Palestine Marathon on Friday. The Israeli Supreme Court affirmed the decision last week.

“I’m sad. This is a race for all Palestine and I wanted to participate, but unfortunately the Israeli side coldly rejected me,” said Al-Masri, a 34-year-old policeman.

“We are still under occupation, and they close all the gates,” he said of Israel in an interview here.

“Here we have a lot of troubles and problems; sometimes you are stressed,” said Al Masri, a father of five. “I change my clothes and go for a run. You might find me on the streets of Beit Hanoun. I may go to the beach. I feel more freedom when I’m running. It changes the mood.”

Al Masri is among about two dozen Gazans who were blocked from competing in the Bethlehem race in 2013, when it made its debut, and again this year.

The marathon, titled Right to Movement, was mapped to highlight the restrictions that Palestinians face daily: The course is two laps around the city of Jesus’ birth, past two refugee camps and the concrete wall that separates Israel from most of the West Bank, with a turnaround at an Israeli military checkpoint.

“It illustrates the whole concept,” said Lise Ring, one of the two Danish women who founded the Palestine Marathon, which drew over 3,500 runners this year, half from the West Bank.

“We want people from around the world to see a Palestine that’s not about the conflict,” she said. “But it’s hard to say ‘Palestine’ without talking politics.”

In denying Al Masri’s permit request — made through Gisha, an Israeli group advocating free movement — the Israeli government said in a March 30 letter that “the present diplomatic/security situation” meant that Gaza residents could cross into Israel only “in exceptional humanitarian cases.”

Gaza runners have also missed big races recently because of frequent closings of the Rafah border crossing with Egypt by that country’s new military-backed government, which is hostile to Hamas, the group that controls Gaza.

Hamas imposes strict religious rules on Gaza, a dense and dirty patchwork of dilapidated shacks and concrete apartment blocks, and its 1.7 million residents bear with economic isolation, daily power blackouts and occasional Israeli airstrikes. But Gaza has also had a hardy band of fast men dating back decades, and lately the culture of running has begun to catch on more widely.

Last Sunday, about 1,000 people participated in 3-, 5- and 7-km runs in Gaza. After dark one evening last week, a few joggers joined the tangle of trucks, tuk-tuks and donkey carts in the streets.
Esmail Haniyah, the Hamas prime minister, is often seen around 5pm outside the Islamic University, running with his security detail.

Wearing slick track suits provided by the Palestine Athletic Federation, they stretched in unison on Tuesday as the call to prayer from a nearby mosque echoed off the stadium’s beat-up bleachers. The sprinters burst forth in small batches: first with knees up, then with heels back, finally with toes forward. The distance runners circled the grassy field.

The runners said that they like the discipline of diet and drills and that training fills idle hours in a territory where the unemployment rate is nearly 40 per cent overall, and much higher for people younger than 30. But the coaches complain that the team’s budget — $15,000 (Dh55,094) a year from an international sports association and small grants from Hamas and the Palestinian Authority — is insufficient, and facilities are few.

“This is the only track in Gaza,” said Nabeel Mabrouk, 70, who has been something of a godfather to generations of Gaza runners. “We run on sand.”

Mabrouk, a former president of the athletic federation, proudly recalled travelling years ago with Palestinian teams to compete in London and New York, Helsinki and Stuttgart. He remembered applying for a visa to attend the 1996 Summer Olympics in Atlanta: At the US Embassy in Kuwait, he said, the consular officer challenged him about his affiliation with the Palestine Liberation Organisation.

“He said to me, ‘You are PLO.’ I said, ‘I am sport.’ He said, ‘OK, you have the visa,’” Mabrouk recalled. Palestinian runners have competed in every Summer Olympics since then.

Al Masri said that when he started running through Beit Hanoun’s graffiti-pocked alleyways, people catcalled, wondering why someone who was not overweight would bother with such unfamiliar exercise. Now he passes other runners on the beach and is recognised by strangers as a hometown hero.

He has not competed in a marathon since 2012. The UN Relief and Works Agency cancelled last year’s Gaza race after Hamas ruled that women could not run, and it did not try to stage one this year.

Still, Al Masri sets out every morning at sunrise for an hour of stretching and another of running, and he puts his sneakers back on every evening for more. There is a marathon in South Korea in October; if he can get there, and post a good time, he hopes to qualify for the 2016 Olympics in Brazil.