Clean mountain air auctioned in China for $860 per jar 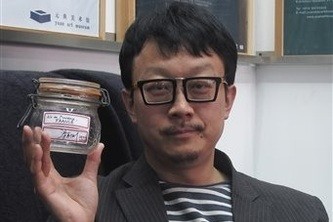 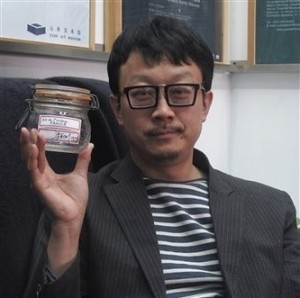 Beijing artist Liang Kegang returned from a business trip in southern France with well-rested lungs and a small item of protest against his home city’s choking pollution: a glass jar of clean, Provence air.

He put it up for auction before a group of about 100 Chinese artists and collectors late last month, and it fetched 5,250 yuan ($860).

“Air should be the most valueless commodity, free to breathe for any vagrant or beggar,” Liang said in an interview.

“This is my way to question China’s foul air and express my dissatisfaction.”

Liang’s work is part of a gust of recent artistic protest — and entrepreneurial gimmickry — reflecting widespread dissatisfaction over air quality in China, where cities often are immersed days on end in harmful pollutants at levels many times what is considered safe by the World Health Organization. The chronic problem has spurred brisk markets for dust masks and home air purifiers.

China’s senior leaders have pledged to clean the country’s air, partly in response to a citizenry increasingly vocal about environmental issues. But it is a daunting task that must be balanced with demands for economic development and employment crucial to maintaining stability.

In February, a group of 20 Beijing artists wearing dust masks lay on the ground and played dead in front of an altar at the city’s Temple of Heaven park in a performance art protest.

In March, independent artists in the southern city of Changsha held a mock funeral for what they imagined would be the death of the city’s last citizen because of smog.

“If smog cannot be effectively cleaned up, what it will leave us is death and cities of death,” artist Shao Jiajun said.

Liang’s contribution is a short, ordinary glass preserves jar with a rubber seal and a flip-top. It has three small, handwritten paper labels: one with the name and coordinates of the French village, Forcalquier, where he closed the jar; one saying “Air in Provence, France” in French; and one with his signature in Chinese and the date — March 29.

The auction closed on the night of March 30, and Chengdu-based artist and entrepreneur Li Yongzheng was the highest bidder.

“I have always been appreciative of Kegang’s conceptual art, and this piece was very timely,” Li said in a telephone interview. “This past year, whether it was Beijing, Chengdu or most Chinese cities, air pollution has been a serious problem. This piece of work really suits the occasion.”

Liang is not the only one to make money from China’s air-pollution angst. Entrepreneurs also see the potential, and so do tourism officials in parts of the country where skies are clear.

In central Henan province, local tourism authorities promoting a resort scooped up mountain air and gave away bags of it in downtown Zhengzhou, the provincial capital. City dwellers greedily inhaled the air, and some said they planned to visit the mountain resort to get more than a lungful.

Chen Guangbiao, a recycling tycoon who briefly made headlines with his abortive plan to purchase The New York Times, has been selling fresh air in cans under his “Good Person” brand.

Want one? They sell for $3 each on China’s online bazaar of Taobao.