Nasrallah: ‘we have overcome the threat’, Assad regime will not collapse in Syria 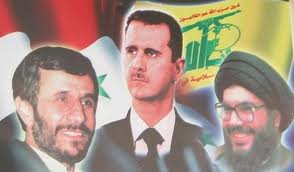 The leader of Lebanon’s militant Hezbollah group says that the government of Syrian President Bashar Assad is no longer in danger of falling.

Hezbollah’s leader voiced his belief that “the Syrian regime is not facing the threat of collapse anymore,” Hassan Nasrallah noted that “we have overcome the threat of partitioning and the military choice (against the regime) has failed.”

Nasrallah also claimed that some of March 14’s supporters are with Hezbollah’s military intervention, attempting to evade the controversy in Lebanon of Hezbollah’s involvement in the Syrian conflict, where many critics have accused the group of entangling Lebanon in the conflict.

“I can say that some March 14 supporters are with our intervention in Syria to protect Lebanon from the terrorist takfiri groups,” he added.

“We’re not facing a problem with our supporters regarding our involvement in Syria. On the contrary, some of those who were hesitant have now made up their minds and decided to support our choice,” Nasrallah said in excerpts of an interview with As Safir newspaper that will be published Monday.

“The battle of Syria is not aimed at creating democracy and justice or combating corruption, but rather at changing Syria’s position and stance, given the several offers that have been received by Syrian President Bashar Assad,” Nasrallah stated.

Nasrallah said that the danger of the Syrian government’s “fall has ended.” Excerpts of the interview were published today by Lebanon’s official National News Agency.

He pointed out that most countries have voiced support for a political solution to the Syrian conflict, expecting further stubbornness in the Russian stance in the coming period.

Nasrallah also expressed his satisfaction over the course of events in southern Syria and on its northern border with Turkey, referring to the Daraa and Kasab regions.

Hezbollah militants have been fighting alongside Syrian government troops against the rebels trying to oust Assad from power. The Shiite group’s fighters were instrumental in helping Assad’s forces dislodge opposition fighters from their strongholds along the Lebanon-Syria border.

However, Hezbollah’s public role in the 3-year-old conflict has inflamed sectarian tensions in Lebanon. The country’s Sunni Muslims support the Syrian rebels.