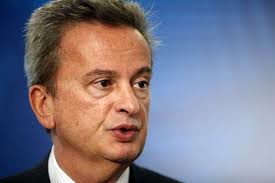 The joint parliamentary committees on Monday met with Central Bank Governor Riad Salameh to get his feedback on the new wage scale.

“Salameh warned of the dangers of adopting a new wage scale on inflation, interests, and on the Global Credit Ratings,” the committees’ MPs said after the meeting.

“Therefore, he called for dividing up the wage scale over a period of five years, to avoid issuing a large sum of money that is estimated at two billion dollars,” they added.

The governor noted that the dangers of the “enormous” new wage scale are related to the amounts of expected future revenues.

When the draft law’s Article 1, which is related to the VAT, was tackled, some MPs suggested increasing it from 10 to 12 percent.

Meanwhile, other members of the committee proposed increasing taxes on luxury items up to 15 percent.

“The talks with Salameh were positive and promising… We will go forward with studying the draft law in order to put it on the parliament’s agenda on Wednesday or Thursday.”

Finance and Budget Parliamentary Committee chief MP Ibrahim Kanaan had announced that the joint committees discussed seven out of nine articles of the draft law on Friday.

President Michel Suleiman signed the decree mid-June 2013 and it was referred to the joint parliamentary committees for further scrutiny.

The wage increase will be retroactive from July 1, 2012.

The state treasury will have more than $1.2 billion to cover as there are over 180,000 public sector employees including military personnel.