Army raids Tripoli in manhunt for fugitives, one captured 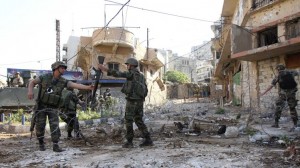 The army on Thursday raided several neighborhoods in the northern city of Tripoli in search of fugitives, as part of the security plan that troops started implementing earlier this week to end the state unrest and instability in the North.

Media reports said that Bakri, however, was able to escape the raids.

“Checkpoints have been erected in the Tripoli neighborhood of Abi Samra and troops raided several locations in the region,” VDL mentioned.

It noted that army forces raided al-Bazar street in the city as they were looking for fugitive Talal Issa.

Troops, however, did not find him, VDL said.

Meanwhile, troops positioned in the Tripoli neighborhood of Jabal Mohsen near the house of Arab Democratic Party politburo chief Rifaat Eid, who had left Lebanon along with his father, Ali Eid.

On Wednesday, the military institution announced arresting 33 people, including 14 Syrians, in Tripoli.

Ex-Prime Minister Saad Hariri lauded the Tripoli security plan on Thursday, saying it proved that “the state can extend its authority across all Lebanese regions when it determines to do so.”

“We particularly salute the efforts exerted by the interior and the justice ministers, as well as all Tripoli’s politicians, and civil activists,” Hariri said in a released statement.

He also praised “the sacrifices of the army and security forces to safeguard the city and protect its people.”

Meanwhile, Telecommunications Minister Butros Harb ordered the technical teams in the ministry and in OGERO to inspect the damages sustained by the phone network in Tripoli due to the clashes.

He called for repairing the network and restoring the phone service in the region.