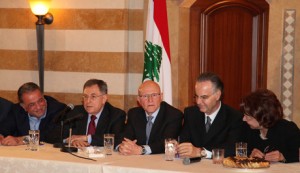 The cabinet on Wednesday approved ten administrative appointments after they were postponed Monday over reasons that turned out to be “sectarian,” as it tasked a ministerial committee with studying the two oil exploration decrees.

According to al-Jadeed TV, the cabinet passed 10 appointments, including those of Prosecutor General Samir Hammoud and Internal Security Forces chief Maj. Gen. Ibrahim Basbous, who had been serving in caretaker capacity.

Ahmed Hamdan was appointed as head of the Audit Bureau, Faten Younis as director of political affairs at the Ministry of Interior and Mansour Daou as governor of the South.

“The cabinet appointed a governor for Akkar, in the first such decision since it became a governorate,” al-Manar television reported.

The president asked the ministers to return with the names of their candidates in order to fill vacancies at all ministries.

The cabinet had postponed the appointments on Monday after disputes forced it to suspend the session for over an hour. Amid Suleiman’s insistence during that session on passing the appointments of Hammoud and Basbous to secure the implementation of the security plan, the ministers of the March 8 forces had stressed that the appointments must be approved as “one package.”

Turning to the issue of oil exploration, which has been witnessing disputes focused on contracts and maritime blocs, the cabinet decided to form a ministerial committee headed by Prime Minister Tammam Salam to study the decrees that are needed to launch the process.