Aoun: Not ready to run for president, uncertain he will win 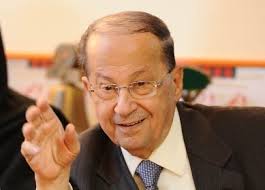 In an interview with Al-Mayadeen on Wednesday, Free Patriotic Movement Leader MP Michel Aoun claimed to be uncertain on whether he would self-nominate for the presidency. Prior to committing, Aoun is looking for signs that favor his success.

“If conditions were favorable, I am a candidate for the presidency, and I am a strong candidate. And if they were not, then I will not nominate myself and the decision is not final yet,” Aoun said.

On the question of his alliance with Hezbollah, and the future of the militia, Aoun responded, “Discussion over terms is useless and we would not have a resistance if it wasn’t embraced by the people.”

Aoun continued, “The resistance came into being thanks to people’s support, especially thanks to southerners’ support, and the resistance gave the best results and is was able to do what all armies of the world did not do. All these nations looked up to the achievements of the resistance.”

Aoun identified security as the top priority should he be elected, stating his first actions would be related to security, “because there are many issues that need to be solved whether on the border with Syria or with Israel.”

Despite his alliances that the baggage that accompanies it, Aoun voiced concern over the ability of a non-independent candidate to succeed, “If a nominee was not independent, they cannot become president and will not accomplish anything.”

Despite the strong ties between Hezbollah, Syria and Iran, Aoun also claimed that he would be free of influence of foreign nations, “I am not that type, and I want to achieve the dream that I want.”

Aoun dismissed the idea of losing ground to rival parties in the upcoming election, stating, “I do not want to compare my popularity with that of the Lebanese Forces.”

Aoun added that if March 14 announced their support for Lebanese Forces leader Samir Geagea for presidency, “I will not nominate myself.”