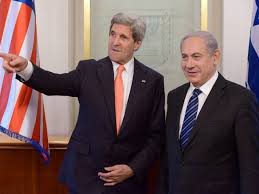 Washington’s top diplomat wrapped up a lightning visit to Israel Tuesday but was to return within 24 hours as speculation grew that a jailed U.S.-Israeli spy could be key to saving peace talks.

Early on Tuesday, he held a second two-hour meeting with Netanyahu, with sources close to the talks saying they discussed a deal to free spy Jonathan Pollard as a way of breaking the logjam in the negotiations.

After flying in from Paris on Monday evening, U.S. Secretary of State John Kerry met for two hours with Israeli Prime Minister Benjamin Netanyahu, before entering talks with Palestinian negotiators at his Jerusalem hotel.

U.S. peace efforts are teetering on the brink of collapse after Israel refused to free a fourth and final group of 26 veteran Palestinian prisoners which would have completed an agreement that brought the sides back to the negotiating table last July.

Furious Palestinian officials have warned that unless Israel changes its stance on the prisoner releases, it could signal the end of the negotiations, which are due to end on April 29 in any case.

U.S. efforts are currently focused on getting the parties to agree an extension to the end of the year.

Shortly after his breakfast meeting with Netanyahu, Kerry was back on a plane heading to Brussels for a NATO meeting.

But he will return to the region on Wednesday, State Department spokeswoman Jen Psaki told reporters traveling with him.

“Secretary Kerry will visit Ramallah on Wednesday,” she said, confirming earlier remarks by a Palestinian official who said he would be meeting with Palestinian President Mahmud Abbas.

Kerry had been due to travel to Ramallah to meet Abbas late on Monday but the meeting was canceled.

Separate sources close to the negotiating teams confirmed that Washington is considering a proposal to release Pollard as a way to break the deadlock.

Pollard was arrested in Washington in 1985 and sentenced to life imprisonment for spying on the United States on behalf of Israel.

“The emerging deal… contains the following elements: the release of Jonathan Pollard before the Passover holiday (in mid April) and the extension of the negotiations with the Palestinians into 2015,” one of the sources said

He said the fourth batch of prisoners would be freed – “including Israeli Arabs” – and Israel would also agree to free another 400 security prisoners not involved in deadly anti-Israeli attacks.

The release of Arab Israelis jailed for nationalist attacks has been bitterly opposed by many within Netanyahu’s ruling right-wing coalition.

The proposal would include a limited freeze on settlement construction, with Israel adopting “a policy of restraint with (West Bank) government tenders” but would not include annexed east Jerusalem.

There was no immediate comment from the Americans. On Monday, Psaki had refused to be drawn on the issue.

U.S. officials insist things are moving, saying only that there are a lot of complex pieces to put in place.

On Monday, the Palestinians gave Kerry a 24-hour deadline to come up with a solution to the prisoner row, warning that a failure to do so would see them turning to U.N. bodies to press their claims for statehood.

A Palestinian source said there had been no new developments from Kerry’s meeting with chief negotiator Saeb Erakat on Monday.

“The meeting did not produce any results because of Israel’s insistence on a Palestinian agreement to extend negotiations until the end of the year in exchange for the fourth contingent of prisoners,” he said.

The Ramallah leadership was to meet again on Tuesday to discuss Israel’s position on freeing the prisoners, senior official Jamil Shehada told Voice of Palestine radio.

Palestinian negotiators say they will only agree to extend the talks if Israel frees another 1,000 prisoners, including political heavyweights, the sick, and women and children.

They have also demanded a freeze on all settlement construction, including in east Jerusalem.