Russia promises to invest in infrastructure of Crimea, Ukraine pushes back 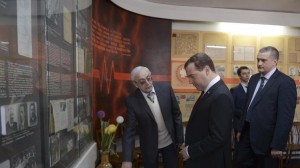 Russia’s takeover of Crimea, a strategic Black Sea peninsula, and its attempts to compel constitutional changes in Ukraine have markedly raised tensions with the West and prompted fears that Moscow intends to invade other areas of Ukraine. Russian Foreign Minister Sergey Lavrov and U.S. Secretary of State John Kerry met for more than four hours of talks Sunday on defusing the tensions, but made no apparent progress.

From Kiev, Ukraine’s new government issued a big ‘hands off!’ to Moscow.

“Russia’s leadership should deal with problems in the Russian Federation, and not with Ukraine’s problems,” Ukraine’s acting president Oleksandr Turchinov said. “It is Ukrainians that should dictate the form of the new constitution and how the country is structured.”

The concerns were stoked by the large numbers of troops Russia has placed along the Ukrainian border for what Moscow said were military exercises. On Monday, the Russian Defense Ministry said one of the battalions that had been sent to the Rostov border next to Ukraine was being withdrawn to its permanent base in the central Samara region, Russian news agencies said.

Russian Prime Minister Dmitry Medvedev, who led a delegation of Cabinet ministers on a surprise visit to Crimea, pledged that Russia will quickly boost salaries and pensions there and pour in resources to improve education, health care and local infrastructure.

But making no mistake about Russia’s view of the peninsula, Deputy Prime Minister Dmitry Rogozin tweeted a photo of himself upon arrival in Crimea with the words “Crimea is ours, and that’s that.”

Russia annexed Crimea from Ukraine in March after a hastily called referendum held just two weeks after Russian forces had taken control the Black Sea region. Ukraine and the West have rejected the vote.

The annexation after Ukraine’s pro-Russian President Viktor Yanukovych was ousted in February following months of protests. Russia claims the ouster was a coup and that the new Ukrainian authorities are nationalist fascists who will abuse Ukraine’s large ethnic Russian population. The new government notes that Yanukovych himself left the country for Russia and there has been no harassment of Russian speakers.

To keep its influence over eastern and southern Ukraine, which are heavily populated by ethnic Russians, Russia has pushed for Ukraine to become a federation where regions would have broad powers. The U.S. says it’s up to Ukrainians to determine the structure of their government, not Moscow.

Medvedev said Russia will create a special economic zone in Crimea — a peninsula of 2 million people — that will create incentives for business with lower taxes and simpler rules. Russia will also seek to develop the region as a top tourist destination and will try to ensure that plane tickets to Crimea are cheap enough to encourage more Russians to visit.

“We must create a new investment history for Crimea, which will be more successful than what it has been,” Medvedev said.

Medvedev particularly emphasized the need to ensure a stable power supply for the peninsula. Crimea currently gets about 80 percent of its electricity and a similar share of its water from Ukraine, and power cutoffs last week raised fears that the Ukrainian government could use energy as a weapon to bargain with Russia.

Medvedev said Russia already has made sure that Crimea has enough backup power capacity to ensure an uninterrupted electricity supply. He added that Russia will work on long-term solutions to Crimea’s energy problem that could involve linking the region to Russia’s power grid or developing local power generation.

He said efforts will also be made to quickly repair water infrastructure to reduce loss of water. In the future, Crimea could get water from Russia or create its own water reservoirs.

Russia’s defense minister, meanwhile, announced Monday that all Crimean men of conscription age will get a deferral from the draft for one year.

In Moscow, the lower house of parliament voted unanimously Monday to annul agreements with Ukraine on Russia’s navy base in Crimea. In 2010, Ukraine extended the lease of Russia’s Black Sea Fleet’s base until 2042 for an annual rent of $98 million and price discounts for Russian natural gas supplies.

Medvedev has said Russia had given Ukraine $11 billion in gas discounts in advance and should claim the money back once the lease deal is repealed. If Moscow makes that move, it would further raise pressure on the cash-strapped Ukrainian government that now depends on Western loans to avoid bankruptcy.

The United States and the European Union have slapped travel bans and asset freezes on members of Russian President Vladimir Putin’s inner circle for the annexation of Crimea and warned that Russia will face even more painful sanctions if it tries to invade eastern Ukraine.

But in a sign that Russian-U.S. talks could be inching toward a compromise, a senior Russian diplomat changed his tone Monday while speaking about Ukraine’s May 25 presidential election, which the West has urged Moscow to recognize.

Deputy Foreign Minister Grigory Karasin said in remarks carried by Russian news agencies that the Ukrainian vote should be fair and transparent. While Karasin said constitutional reform in Ukraine should remain the top priority, his statement seemed to indicate a softening of Russia’s previous stance that the presidential vote was premature and needed to be pushed back to the fall.

Karasin refused to say if Moscow would recognize the outcome of the vote.