Jumblatt: Lebanon needs dialogue and a firm state of security 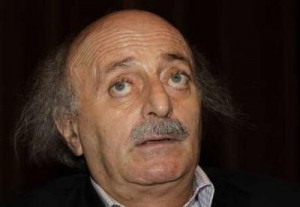 Progressive Socialist Party leader MP Walid Jumblatt said that there was no point in boycotting the dialogue session called for by President Michel Suleiman.

“What is needed more than ever before is firmness on behalf of the state and the security and military apparatuses, to put an end once and for all to this situation that is claiming the lives of dozens of innocent citizens,” Jumblatt said in his weekly statement, published Monday on the Al-Anbaa website.

“Boycotting the dialogue does not affect [it] because it will be open and tackle more than one issue,” Jumblatt said.

The PSP leader also said that dialogue was necessary to overcome the current situation.

“It is not beneficial to boycott the dialogue, because there are external and internal interventions threatening Lebanon that better be faced with dialogue among Lebanese parties,” he said.

On Thursday, the cabinet agreed that the Lebanese army and security forces should implement a security plan for the northern city of Tripoli and the Beqaa Valley.

“The army and security forces will be tasked with implementing a plan to ensure security. [They will] confiscate weapons stores in Tripoli’s neighborhoods and Jabal Mohsen, enforce arrest warrants [for wanted persons], and stabilize the security situation in the Beqaa,” Information Minister Ramzi Jreij said in a statement after the session.

The March 8 alliance’s Hezbollah and Marada Movement as well as their March 14 rivals the Lebanese Forces have all said they would not attend the national dialogue session called to convene Monday by President Michel Suleiman.