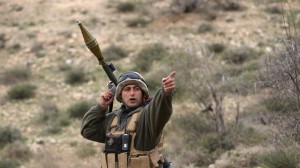 A suspected bomb-maker died of his wounds after he was shot by Lebanese soldiers trying to arrest him at a house in a border town near Syria, security sources said.

Sami Al-Atrash was suspected by authorities of preparing car bombs to plant in Shi’ite areas and coordinating rocket attacks on Shi’ite towns in retaliation for Lebanese militant Shi’ite group Hezbollah’s role in Syria.

Hezbollah has sent fighters into Syria to support President Bashar al-Assad fight a majority Sunni revolt, deepening sectarian woes in Lebanon, which suffered its own civil war from 1975 to 1990.

Lebanon has endured rocket and bomb attacks as the Syrian conflict spreads beyond its border, bringing thousands of refugees and Syrian rebels into its frontier towns.

The sources said Lebanese intelligence services found out that Atrash was at a house in the border town of Arsal and soldiers went to raid the house. When they arrived, Atrash and two companions opened fire, and the army responded.

Atrash was wounded and later died in hospital, while his Syrian companion was in a critical condition, the sources said. He was also accompanied by a Lebanese man who was not wounded.

Arsal, which houses thousands of Syrian refugees, has been used by rebels to recuperate but has also been attacked by Syrian helicopters.