Syrian Opposition Chief to Arab Summit: Give us better weapons 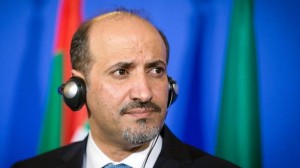 Syria’s opposition chief urged Arab leaders Tuesday to pressure the international community to supply rebels with advanced weapons that would tip the balance of power on the ground.

Addressing the Arab summit in Kuwait, National Coalition chief Ahmed Jarba also urged Arabs to give Syria’s Arab League seat to the opposition and hand them Syria’s embassies in their countries.

In his address, Jarba called on Arab leaders to “pressure the international community to commit to its promises to supply sophisticated weapons to our revolutionaries”.

“I do not ask you for a declaration of war, but I ask you to support our cause and find a solution guaranteeing the interests of our people,” said Jarba.

He called onto Arab states to “intensify all forms of humanitarian support to your Syrian brothers inside the country and in the diaspora” and to “pay greater attention to the situation of Syrian refugees and residents in Arab states.”

Jarba slammed keeping Syria’s seat empty at the Arab summit Tuesday, after it was granted to the opposition last year in Doha, saying this would send a message to Syrian President Bashar al-Assad that he can “kill” his own people with impunity.

“Keeping Syria’s seat vacant sends a clear message to Assad that he can kill the Syrian people and that the seat will still be there for him,” Jarba said.

As a result, Jarba addressed the summit in Kuwait City Tuesday but was not allowed to speak from the spot reserved for Syria.