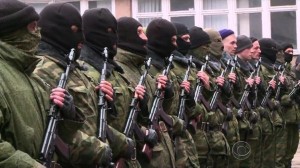 Ukraine on Monday ordered its outnumbered troops to withdraw from Crimea following the peninsula’s lightning seizure and annexation by Russia in response to the fall in Kiev of a pro-Kremlin regime.

The dramatic but seemingly inevitable announcement came after the fall of another Ukrainian base in Crimea and as world leaders gathered in The Hague for a security summit dominated by concerns over the most explosive East-West standoff since the Cold War.

“Europe and America are united in our support of the Ukrainian government and the Ukrainian people, we’re united in imposing a cost on Russia for its actions so far,” U.S. President Barack Obama told reporters shortly after landing in the Netherlands.

A top commander in NATO had warned on Sunday that the Western military alliance was carefully watching massive Russian troop formations on the eastern border of Ukraine that could theoretically make a push across the vast ex-Soviet country at any point.

Moscow has denied any such plans despite President Vladimir Putin’s open ambition to resurrect vestiges of the Soviet empire and stamp his authority over eastern European nations that sought protection from the West following the 1989 fall of the Berlin Wall.

But the Kremlin has made clear it intends to “protect” compatriots in the Russifies southeastern swaths of Ukraine that it says have been victimized by violent nationalists since last month’s rise to power of a pro-European team.

Ukraine’s acting president Oleksandr Turchynov somberly told top lawmakers that both servicemen and their families would now be relocated to the mainland.

“The national security and defense council has reached a decision, under instructions from the defense ministry, to conduct a redeployment of military units stationed in the Autonomous Republic of Crimea,” Turchynov said in nationally televised remarks.

“The cabinet of ministers has instructions to resettle the families of soldiers as well as everyone else who today is forced to leave their homes under the pressure and aggression of the Russian army’s occupying forces.”

Crimea’s pro-Kremlin deputy premier Rustam Temirgaliyev told Russia’s RIA Novosti state news agency that “all Ukrainian soldiers have either switched to the Russian side or are leaving the territory of the Crimea.”

Turchynov’s announcement came less than a month after Putin won authorization to use force in response to the February 22 ouster of pro-Kremlin president Viktor Yanukovych regime by more nationalist leaders who are seeking a closer alliance with Europe.

Ukraine’s increasingly demoralized forces had been steadily losing ground on the Black Sea peninsula and saw their main airbase outside the regional capital Simferopol stormed on Saturday.

The assault by Russian troops and pro-Kremlin militias continued on Monday with the fall of a Ukrainian naval base in the east Crimean port of Feodosia.

Turchynov praised his country’s soldiers despite heavy criticism by some Crimean commanders of confusion and indecision reigning among the army and naval brass in Kiev over the past month.

“Despite the enormous losses, the Ukrainian soldiers in Crimea did their duty,” said Turchynov.

“Most importantly, they gave the Ukrainian armed forces the opportunity to prepare their defenses, to put the military on full combat alert, and to launch a partial mobilization.”

Several top officials had warned on Sunday that they feared an attack by Kremlin forces on the heavily Russified regions of southeastern Ukraine was now imminent.

The Kremlin stamped its claim on Crimea on Monday with a symbolic visit by Defense Minister Sergei Shoigu — the first top Moscow official to visit the mostly Russian-speaking region of two million people since its March 16 independence referendum.

Russia’s latest surprise assault in the rugged region the size of Belgium came in the pre-dawn hours on Monday and involved both armored personnel carriers and stun grenades.

The Ukrainian defense ministry said Russian paratroopers were lowered onto the Feodosia naval base from four helicopters in a commando-style operation in which guns were fired in the air and stun grenades strewn across the facility.

Several military trucks were seen leaving the base less than two hours later with some Ukrainian marines whose hands had been tied.

An AFP reporter spoke to several marines who had later been freed but who found their belongings were missing when they returned to the barracks.

Ukraine said two commanders were kicked in the face before being taken away in a helicopter in an unknown direction.

The base in Feodosiya housed Ukraine’s only marine battalion. The country’s marine union said it was home to an elite unit that was part of the navy.

News agencies in Moscow cited the Russian defense ministry as saying that 189 Ukrainian military facilities and bases in Crimea were flying the Russian flag by Saturday.

The two-day meeting in The Hague will feature both a meeting of the Nuclear Security Summit and a meeting of leaders from the Group of Seven (G7) leading industrialized nations that Obama hurriedly convened last week.

The G7 leaders are expected to discuss stripping Russia of its coveted seat in the larger Group of Eight (G8) grouping that Moscow gained in 1998 as a reward for pursuing a democratic post-Soviet course.

Monday’s talks at The Hague will also feature what promises to be one of the most difficult meetings to date between U.S. Secretary of State John Kerry and Russian Foreign Minister Sergei Lavrov.

It will be their first meeting since Washington imposed financial restrictions on the most powerful members of Putin’s inner circle for their decision to resort to force in Ukraine.