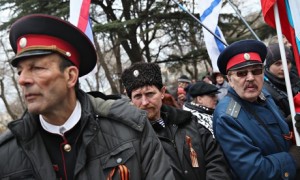 Russian forces pushed Saturday to complete their expulsion of the Ukrainian military from the disputed Crimean Peninsula, smashing through the gates of a base here with armored vehicles, firing weapons into the air and demanding that the cornered Ukrainian soldiers surrender.

By evening, Russian forces were fully in control as negotiations over the terms of withdrawal appeared to be continuing.

The base here, adjacent to the Sevastopol airport, was one of the last Ukrainian strongholds, and the assault on Saturday was a larger and more dramatic military operation than at other installations where Ukrainian forces have capitulated steadily in recent days as Russia declared its formal annexation of the region.

The takeover came as Russia appeared to try to assuage international worries that its incursion into Ukraine would expand beyond Crimea, by agreeing to the deployment of a team of international monitors to places in Ukraine outside the peninsula. The fears of further seizures of territory had risen Friday as Russian troops massed along the border with eastern Ukraine, and the United States had issued a stern warning against further incursions.

The agreement, however, pointedly excluded Crimea, drawing strong condemnation in the West. A Russian statement said that excluding Crimea “reflects the new political-legal realities” because it has “become part of Russia.”

The military operations on Saturday seemed to add an exclamation mark to that statement, as Russian forces and loosely-organized local militias sought to complete their ousting of Ukrainian military personnel in Crimea. The Kremlin has invited Ukrainian service members to join the Russian military with no change in rank and potentially increased pay, but many have declined.

On Wednesday, the Ukrainian Defense Ministry in Kiev said it had drawn up plans to evacuate its military personnel, effectively announcing a surrender and yielding to the reality of the Russian occupation that began late last month.

A spokesman for the Ukrainian military in Crimea said Russian troops had also taken a base on Saturday at Novofyodorovka, northwest of Simferopol, the regional capital. At the Belbek base here, Russian forces issued an ultimatum earlier in the day, warning of an attack if the troops did not relinquish control of the base.

Russian forces have issued similar ultimatums — and subsequently seized control — at other bases across Crimea over the last week, without casualties. At least one person was wounded Saturday at the Belbek base, beaten by Russian special forces, but it was unclear if the man was a soldier or a journalist.

Tension and anticipation had risen throughout the afternoon at the base.

After scattered verbal exchanges between the Ukrainians and Russian soldiers gathered outside the base’s black iron fence, the Russian mobilization began at about 5 p.m. One armored vehicle smashed through the main gate, while a second broke through a cement wall a short distance away.

There were sporadic bursts of gunfire, and several loud bangs from smoke grenades. At least one Russian soldier fired a handgun into the air repeatedly. Meanwhile, on the streets of a residential neighborhood near the base, armed local militiamen, many wearing masks, had gathered in large numbers, apparently to support the siege.

As in other similar operations, the militiamen quickly formed a perimeter to block access to the base, linking arms to form a human wall. Inside the base, the Ukrainian soldiers and some journalists were surrounded; ultimately, the journalists were searched and ejected, and most of the soldiers were sent home to pack their personal belongings.

In interviews earlier in the day, the soldiers had expressed frustration with the lack of help from the Ukrainian government in Kiev but said they were defending the base as a matter of honor, having sworn to serve the people and government of Ukraine.

“I took an oath,” said one commander of a brigade, adding that he felt no personal antipathy toward Russia or Russians.

The announcement of an agreement on monitors from the Organization for Security and Cooperation in Europe seemed to lessen the likelihood of a Russian military advance in eastern Ukraine. The Kremlin has insisted that the troops massed along the border are engaged in training exercises.

Even if the training exercise is pretext, it seemed unlikely that Moscow would agree to allow monitors in ahead of a broader invasion.

In a statement, the Russian Foreign Ministry said it hoped the monitors would helped settle the political unrest in Ukraine, which began when its former pro-Russian leader backed out of closer ties with the West. The protests that followed ultimately drove the leader, President Viktor F. Yanukovych, from power, precipitating Russia’s decision to take over Crimea.

Russia maintains that it was forced to intervene in Crimea to protect ethnic Russians, who form a majority in the territory that was part of Russia until 1954 when it became part of the Ukrainian Soviet Socialist Republic. The Russian statement called on the observer mission to help eradicate “radical” elements in Ukraine.

The final agreement among the 57-member Organization for Security and Cooperation in Europe — based in Vienna — came late Friday after Russia lifted its objections. The United States Mission issued a statement saying it still considered Crimea part of Ukraine, noting that only Russia disagreed.

The statement from the Russian foreign ministry called the negotiations “complicated.” The wording of the final accord was left rather ambiguous, listing various geographic areas but not Crimea. Last week, Russian forces prevented O.S.C.E. military observers from entering Crimea.

The first civilian observers were expected to arrive by Saturday night and over Sunday, said Tatyana Baeva, a spokeswoman for the international group, via email. The full contingent, to be recruited from member states, will arrive in Ukraine over the next week, she said.

The agreement among member states established the O.S.C.E. Special Monitoring Mission for six months, saying it could grow to 500 members if needed. Their main task is to observe the security situation and to report on specific incidents.

There were reports of tension in eastern Ukraine on Saturday, with small demonstrations in at least two cities where pro-Russian demonstrators demanded a similar referendum to the one held in Crimea on March 16.