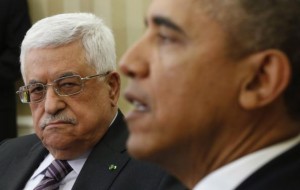 In White House talks overshadowed by the Ukraine crisis, Abbas acknowledged that time was running out for Middle East negotiations and called on Israel to go ahead with the release of a final group of Palestinian prisoners by the end of March to show it is serious about peace efforts.

Obama, who met Israeli Prime Minister Netanyahu two weeks ago, made clear he was not giving up on the faltering U.S.-led peace process despite widespread pessimism about reaching a “framework” deal to extend talks beyond an April 29 deadline.

“It’s very hard,” Obama said with Abbas sitting beside him in the Oval Office. “We’re going to have to take some tough political decisions and risks if we’re able to move it forward, and I hope that we can continue to see progress in the coming days and weeks.”

One of the main stumbling blocks is Netanyahu’s demand that Abbas explicitly recognize Israel as a Jewish state. The Palestinians have refused, saying such a concession would destroy their own narrative for nationhood.

Without acknowledging Israel as a nation-state of the Jewish people, Abbas reminded Obama that Palestinians have accepted the “legitimacy” of Israel since 1988 and in 1993, “we recognized the state of Israel.”

Washington has endorsed the Israeli position but says the issue should not be a roadblock to diplomatic progress at this stage and should be dealt with future negotiations.

Making a foray into Middle East diplomacy after a failed first-term peace effort, Obama insisted that, after decades of on-off negotiations, the likely contours of any elusive final peace agreement are well known.

“Everybody understands what the outlines of a peace deal would look like, involving a territorial compromise on both sides based on ’67 lines with mutually agreed upon swaps that would ensure that Israel was secure but would also ensure that the Palestinians have a sovereign state,” Obama said.

Abbas agreed that a solution should entail a Palestinian state built on borders that existed before the 1967 Middle East war and with East Jerusalem as its capital. Netanyahu has declared that Israel would never return to earlier lines it considered indefensible and regards Jerusalem as indivisible.

ABBAS: NO TIME TO WASTE

Facing pressure from his own people to hold the line on concessions, Abbas told reporters at the start of the talks, “We don’t have any time to waste. Time is not on our side.”

Afterward, Abbas spokesman Nabil Abu Rdainah described the meeting as “long, intensive and difficult.” He said a number of ideas were considered but “we did not receive anything in writing.”

Looming over the peace effort is the question of whether Israel this month will carry out the release of a final batch of Palestinian prisoners, to which it agreed in order restart negotiations last year. U.S. officials fear that if Israel scraps the release, peace talks could break down.

“We are hopeful that the fourth batch will be released by the 29th of March because this will give a very solid impression about the seriousness of these efforts to achieve peace.”

Kerry brought Israel and the Palestinians back into negotiations on July 29 after a three-year gap. At the time, he said the target was to achieve a “final status agreement” within nine months.

U.S. officials have scaled back their ambitions, saying they are now trying to forge a non-binding “framework for negotiations” by then. But the two sides do not appear to have made much visible progress on narrowing their differences.

“I believe that now is the time for not just the leaders of both sides but also the people of both sides to embrace this opportunity,” Obama said.

Obama seemed to take pains to bolster Abbas, commending him for his commitment to peace. The U.S. president appeared to be pushing back against Netanyahu’s assertion during his visit that Abbas had not done his part.

The Palestinians point to Israeli settlement-building in the occupied West Bank as the main obstacle to peace.

Abbas faces pressure at home not to agree to any loosely worded accord that would simply prolong negotiations, with no clear end in sight.

Although the terms under discussion for the framework accord have not been published, Palestinians say early indications suggest they will be offered less than what former U.S. President Bill Clinton laid out in 2000 in the so-called Clinton Parameters.