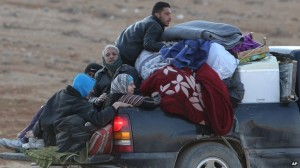 The Syrian army took control of a key town on the Lebanese border on Sunday, the alleged source of several car bombs which have struck Beirut, racking up another strategic gain for the government as the conflict enters its fourth year.

Backed by fighters from the Lebanese Shiite movement Hezbollah, the army seized the rebel-held town of Yabroud little more than 24 hours after troops first stormed its eastern limits on Friday night. Government forces have been closing in on the town for months as they attempt to cut supply lines across Lebanon’s porous border.

Celebratory gunfire could be heard from Beirut’s southern suburbs, the base of support for Hezbollah, which has paid a heavy price for the group’s cross-border activities.

The sprawling suburbs in the Lebanese capital have been devastated by regular car bombs in retaliation for Hezbollah’s backing of Syrian President Bashar al-Assad. Lebanese security officials and Hezbollah have said several of the explosive packed vehicles have traveled across the border from Yabroud.

Hezbollah’s television channel, Manar, broadcast footage from what it said was Yabroud’s town center Sunday. Men in fatigues raised a Syrian flag on a pole in the middle of the street, while another held aloft a portrait of Assad.

The battle for Yabroud is part of a wider Syrian army and Hezbollah offensive to secure the rugged border area of Qalamoun, cutting rebel supply lines into Syria.

“The battle for Qalamoun does not end with Yabroud,” said Bassel Foaad, a Qalamoun-based activist who had sought refuge in the Lebanese border town of Arsal.

However, the fall of the area’s main town will strike a blow to rebel morale as, after three grinding years of conflict, Assad steadily makes gains.

Some rebels, including fighters from the al-Qaeda linked Jabhat al-Nusra, remained in Yabroud, according to activists, but they said most retreated to nearby Flita and Rankous. Others withdrew across the border to Arsal, which has become a safe-haven for Syrian civilians and militants, and where the Lebanese government has little control.