Crimea secession vote: how, why and what's next? 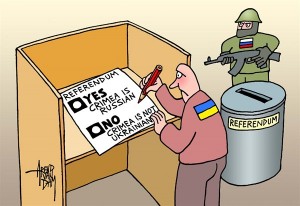 The Ukrainian region of Crimea votes Sunday in a hastily organized referendum to break away and join Russia, in defiance of broad condemnation from the international community, which has described the process as illegitimate.

Moscow-backed politicians in Crimea, a territory of 2 million people, argue the move will ensure the local population protection from radical nationalism that they say surged after President Viktor Yanukovych was forced to flee Ukraine. No immediate proof of specific threats has been produced, however, and the leadership in Kiev describes what is happening in Crimea as a crude land grab.

The road to the referendum

Ukraine’s territorial uncertainty has its roots in the protests that led to the downfall of Yanukovych, who enjoyed support from the Kremlin and had his base of support in the mainly ethnic Russian-populated southeast. The demonstrations began in November when Yanukovych abruptly refused to sign a long-anticipated political association and free trade agreement with the European Union, opting instead for closer ties with Russia.

Weeks of peaceful rallies were punctured by bursts of violence, which culminated with the death of dozens of protesters in late February

A peace deal between the government and opposition was overseen by EU diplomats, but that arrangement was overtaken within days when protesters took control of the capital, Kiev, and police abandoned posts. The parliament voted to remove the president from power and soon appointed a replacement.

An early proposal in the new parliament that would have seen the status of the Russian language downgraded was greeted with alarm in some parts of the country. Russia has also loudly expressed indignation over what it claims is the inexorable rise of radical nationalist groups, a concern that critics suggest is an exercise in disingenuousness.

The referendum ballot will feature two questions: One, to grant Crimea greater autonomy within Ukraine. The other, which is widely expected to secure the bulk of support, envisions annexation by Russia.

What little actual campaigning there’s been in Crimea has taken place under the often menacing gaze of local militia forces, as well as heavily armed troops under apparent command from Moscow. In the face of overwhelming evidence, Russia denies it has deployed any troops.

The pro-annexation message has been crude but effective, and is aimed at instilling alarm over the new Ukrainian government’s purported design to marginalize the country’s ethnic Russian population.

One billboard showed two maps of Crimea: one emblazoned in the tricolor of the Russian flag. The other shows it against a crimson background and stamped with a swastika.

Supporters of the referendum have argued it is little different from the independence vote to take place in Scotland later this year. But British officials argue the latter vote has been two years in the waiting and is being held in a climate of free discussion. Crimeans have had less than two weeks to ponder on their referendum and public debate has been notable for its absence.

Crimean authorities say if Ukrainian soldiers resolutely occupying their garrisons don’t surrender after the election, they will be considered “illegal.”

On the diplomatic front, Russia looks ever more isolated as it faces the prospect of sanctions from Western nations and the ambivalence of China.

Leaders of the mainly Muslim Crimean Tatar minority, who make up more than one-tenth of the region’s population, insist they want to remain part of Ukraine and worry about what fate awaits them in a country they have no desire to join.

Inside Russia, President Vladimir Putin has fared well from his hard-line stance on Crimea and enjoyed a bump in popularity ratings. Still, if public criticism of his policies is rare, it’s in no small part because the already embattled independent media has faced a renewed onslaught of state-led intimidation.

Once Crimea’s pro-Russian leadership seals some vague semblance of legitimacy through the referendum, attention will likely swing to eastern Ukraine, another heavily Russian-populated area in which the central government is struggling to stamp its authority. The past few days have seen ugly confrontations between pro-Russians and pro-Ukrainians, and anxieties are stirring about the potential for that situation to worsen.

A national presidential election set for May 25 is seen by the interim authorities as an opportunity to restore democratic processes in a country currently run by an interim post-revolutionary Cabinet. Perceptions of an uncertain security situation could undermine confidence in what that vote produces, however.