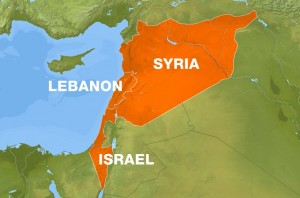 “A certain number of suspects approached the Israel-Lebanon border. Soldiers fired in the air to warn them away, and they moved off,” an IDF spokeswoman was quoted as saying, adding that no one was injured in the exchange.

No injuries were reported on either side.

This development comes after Israel fired tank rounds and artillery into southern Lebanon on Friday, reportedly in retaliation for a bomb that targeted Israeli soldiers patrolling the border.

The Israel-Lebanon border has been mostly quiet since Israel and the Lebanese militia Hezbollah fought an inconclusive war in 2006, even as civil war has raged in neighboring Syria over the past three years.

An Israeli military spokeswoman said the Israeli fire targeted “Hezbollah terror infrastructure in southern Lebanon” and that a hit was confirmed. A Lebanese security source said six mortars had struck the area.

Hezbollah has been helping President Bashar al-Assad in Syria fight rebels trying to topple his government.

Earlier this month Israel said its troops shot two Hezbollah gunmen who tried to plant a bomb further east near the fence between the Israeli-controlled Golan Heights and Syrian-held territory.