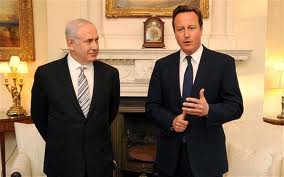 David Cameron has made his first visit to Israel as Prime Minister, telling members of the country’s parliament, the Knesset, that his family tree includes a Jewish great-great-grandfather.

In his address, Mr Cameron underlined his “rock solid” commitment to Israel by revealing how his great-great-grandfather Emile Levita, came from Germany to Britain 150 years ago.

He also spoke of an illustrious earlier ancestor, Elijah Levita, who wrote what is thought to have been the first ever Yiddish novel, a chivalric romance called the Bove-Bukh.

Levita was also responsible for another important work, the 1541 Translator’s Book, the first dictionary of the Targums or Aramaic commentaries on the Hebrew Bible.

It led the Prime Minister to consult Dayan Ehrentreu, former head of the London Beth Din, the rabbinical court, about his roots in a meeting he called “one of the highlights of my year”.

Levita, according to Dr Wise, is the Latin form of the name Levite, a Jew descended from the Tribe of Levi, the son of Jacob and one of the original twelve tribes of Israel.

According to the scholar, the Prime Minister could also be a direct descendant of the biblical Hebrew prophet, Moses.

“The leader of the Levites at the time of the exodus from Egypt was Moses, who was married with two sons named in the Bible,” said Dr Wise.

“However, later descendents of Moses are unknown and many of today’s Levites – often carrying the surnames such as Levy, Levine, Levitan or Levita – could in fact be his descendants.”

Elijah Levita’s lexicon of 1541 is credited with explaining much of the Mishnaic Hebrew language and was a supplement to two important earlier dictionaries.

His novel, The Book of Bove, was written in 1507 and printed in 1541. It is based on an Italian version of an Anglo-Norman tale about a queen who betrays her husband and causes his death.

Mr Cameron’s great-great-grandfather Emile was an émigré banker who became a British citizen in 1871 and enjoyed considerable financial success, becoming a director of the Chartered Bank of India, Australia and China, which had offices in Threadneedle Street in the City of London.

He took on all the trappings of an English gentleman – he hunted, owned a grouse moor in Wales, and started a family tradition which has continued through to the Prime Minister, by sending his four sons to Eton.

Emile’s eldest son, Arthur, a stockbroker, married Steffie Cooper, a cousin of the Royal Family, providing Mr Cameron with a link to King George III, an ancestor he shares with the Queen – his fifth cousin once removed.