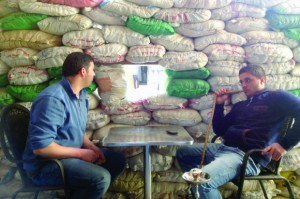 Hermel, Lebanon- Luliana Allam, an agricultural engineer of Romanian origin, checks on the flowers she said she planted in the Lebanese town of Hermel, about 10 miles (16 kilometers) from the Syrian border, in an attempt to brighten the image of the northeastern city.

“We insist on showing the face of life here in response to the missiles and explosions that trouble us and the general state of anxiety,” she told Asharq Al-Awsat.

Hermel, considered a Hezbollah stronghold, looks more like a ghost town these days, its streets deserted except for security personnel ready to pounce on any suspicious people. Security measures were stepped up significantly after three suicide bombings struck the city on January 16. The Lebanese branch of the Al-Nusra Front—whose Syrian wing is embroiled in the fight against Syrian President Bashar Al-Assad—claimed responsibility for the attacks, saying they were retaliating against Hezbollah’s involvement in the Syrian conflict.

The Al-Nusra Front said the bombings were part of a “series of vengeful attacks,” raising fears of more attacks on the horizon. Hermel has changed significantly since the first explosion, with residents adapting not just to the increased security presence, but also to missiles fired at the city from inside Syria.

One resident, Ali Nassredine, told Asharq Al-Awsat: “People are not scared of the missiles falling on the town and are going about their normal lives.”

But “these incidents have changed life in the city and caused the displacement of residents to the surrounding villages and the capital, leading to a decline in business,” Nassredine added.

Over 200 rockets have fallen on the predominantly Shi’ite town, which has a total population of 45,000. Most of the rockets are fired from the western Syrian city of Al-Qusayr, near Homs, and the district of Al-Qalamoun in the Rif Dimashq governorate.

The first missile struck on April 20, 2013, not long after Hezbollah fighters were reported to be fighting alongside Syrian government troops against Syria’s anti-Assad rebels. The Lebanese Shi’ite militia has been instrumental in helping Syrian government troops recapture several strategic towns, most importantly the Al-Naamat area along the Lebanon–Syria border.

Other barrages have arrived sporadically since then, including one attack on January 25, when the Al-Qaeda-linked Abdullah Azzam Brigades launched seven missiles at the town in retaliation for Hezbollah’s involvement in Syria.

However, while the missile attacks on Hermel have been intermittent, security remains tight and the situation tense as the number of suicide attacks, particularly car bombs, has increased. In response, the Lebanese Army has stepped up security measures in the town, setting up four fixed checkpoints between Baalbeq and Hermel in order to search vehicles and check passengers’ identities. Two military personnel and a civilian were reported killed on February 21 by a car bomb that targeted the military checkpoint at the entrance of the town, leading to security measures being enhanced even further.

In addition to the checkpoints staffed by the Lebanese military, a number of makeshift checkpoints manned by civilians have also been established around the town. Just an eighth of a mile (200 meters) from the military checkpoint, two unarmed civilians in plain clothes stand guard over the town’s eastern entrance, while other civilians are stationed across the city ready to report any suspicious vehicles.

At the entrance of the town, Hezbollah militia wearing military fatigues have also set up checkpoints to inspect cars. This move has provoked the ire of the Lebanese authorities and prompted Justice Minister Ashraf Rifi to raise the issue with senior Hezbollah security official Wafik Safa last month. In addition to checkpoint, Hezbollah security operatives are known to conduct regular street patrols in a fleet of 4×4 vehicles with blacked-out windows.

Speaking to Asharq Al-Awsat, the deputy mayor of Hermel, Issam Bleibel, said that the plain-clothed security personnel did not have any connection to Hezbollah, stressing that they are members of “people’s committees [who have] volunteered to protect civilians.”

“After the explosions that hit Hermel, families and tribes . . . chose some of their youth to monitor the streets,” he said. Bleibel claimed that Hermel’s residents had “demanded that Hezbollah establish official checkpoints in the city, but the party’s leadership refused and the Lebanese military also rejected self-security measures.”

According to Bleibel, this state of affairs has “led families to provide young volunteers to monitor the entrances of the town in a bid to prevent car bombs from entering.”

The suicide bombings and the tense security measures have isolated Hermel from the rest of the country and neighboring Syria, the main source of revenue for Hermel before the start of the Syrian crisis.

Given its proximity to Syria, residents of Hermel would often go Syria through Al-Qusayr for cheap medical services and to buy basic foodstuffs. That became nearly impossible after Syrian rebels took over the city of Al-Qusayr in fall 2012.

The Syrian crisis has affected tourism and commercial sectors in the city, leading revenues to fall 70 percent, though residents deny it has affected their relationship with their neighbors over the border.

Bleibel said that “1,400 [people] have moved from Syria into Hermel and are receiving aid and medical aid, without any of them being harassed.”

Residents of Hermel take pleasure in telling the story of a Syrian rebel named Hussian, who had worked in the Lebanese town before the outbreak of the Syrian conflict. Hussian went to Syria to fight against Hezbollah and Syrian government troops. He was wounded and brought to the Lebanese border in search of treatment. Despite the fact that he was fighting against the side most Hermel residents sympathize with, the story goes that they insisted that Hussian be treated in the town’s hospital.

The spillover from Syria has also forced local businesses owners to place sandbags in front of their shops for protection purposes, which measure that has altered the city’s appearance.

Asharq Al-Awsat spoke to Ibrahim Alo, the owner of a popular cafe in the town. He said he uses the sandbags in order to “provide a safe place for customers who want to smoke shisha in in the open air.”

What distinguishes Alo’s cafe is a small opening he left in the sandbag wall, for two reasons: to allow customers to see what is going on in the street and “as a sign that the cafe is open.”

Hermel, then, seems in some ways to be a reflection of Lebanon itself as it attempts to deal with the violence in neighboring Syria: deeply entwined with what happens in its larger neighbor and rocked by the violence that has spilled over the border, but determined to remain itself, as far as it can.