Al Jazeera: Iran behind PAN AM bombing over Lockerbie 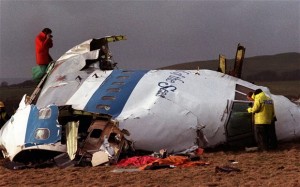 The disappearance of a Malaysia Airlines jet, along with new revelations about the Pan Am 103 bombing over Lockerbie, are chilling reminders of the risks involved in flying

It is a gruesome coincidence that a new development in the case of Pan Am 103, the airliner blown up over Lockerbie in 1988, should arrive just as the world is transfixed by another aviation disaster, in the shape of a missing Malaysia Airlines jet. Yet it is oddly apt, too. It was that act of aggression, which killed 270 people, that did most to draw our attention to the vulnerabilities of air travel, and to institute the tightening of security checks – which were further strengthened after the 9/11 attacks in New York and Washington.

Now, an Al Jazeera investigation appears to have established that the Pan Am bombing was organized by the Iranians. This had long been suspected – but the new evidence seems to confirm that Tehran conspired with Syrian-linked terrorists to target the American airliner in revenge for the accidental shooting-down of an Iranian plane by the USS Vincennes in the Persian Gulf earlier in the year.

It may therefore be possible that the only man to be jailed for the bombing, Abdelbaset al-Megrahi, a Libyan security officer, was innocent of planting the device – as his defence team consistently claimed before he was controversially released from prison on compassionate grounds. The investigation indicates that while Col Gaddafi’s regime may have been involved in the planning, Libya accepted responsibility and paid compensation in order to get sanctions lifted.

Had Pan Am 103 exploded over the Atlantic as planned, rather than over land, its fate could well be as mysterious as that of Flight MH370 currently is. Both events, however, are reminders of the need for vigilance – not least, in the current instance, over how two people with stolen passports managed to get on board. Flying is still safer than it has ever been. But it takes great efforts to keep it so.