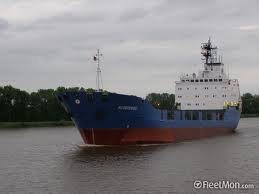 A ship seized by the Israeli navy on suspicion of smuggling arms from Iran to the Gaza Strip docked on Saturday in Israel, which planned to put the cargo on display in hope of denting Tehran’s rapprochement with the West.

The Klos C was taken without resistance in the Red Sea on Wednesday. Israel said it found dozens of advanced Syrian-made rockets hidden on board in Iran and destined for the ship’s next port in Sudan, from where they would have been trucked through Egypt to Gaza.

Iran and Gaza’s Islamist Hamas rulers, both hostile to the Jewish state, rejected the Israeli findings as fabrications.

Israeli Prime Minister Benjamin Netanyahu, who has been dismayed at world powers’ nuclear diplomacy with Iran since Tehran installed the relatively pragmatic Hassan Rouhani as president last year, voiced hope they would now rethink the outreach.

“This ship will get to Eilat and the truth will become fully known,” Netanyahu told Israel’s Channel 10 TV on Friday. “This is the real face of Iran.”

The Israeli military said it would take around two days to find and bring out for public viewing the contraband from the some 150 cargo containers abroad the Panamanian-flagged Klos C.

The ship would then be free to leave, as would its 17 crew members, who include Turks, Indians, Georgians and Azeris.

“They are on the ship. They will remain with the ship. Given that they have no hand in the arms smuggling, they will continue on their way,” Israeli Admiral Oded Gur-Lavi told Reuters.