At least 42 killed in Suicide car bomb in Hillah, Iraq 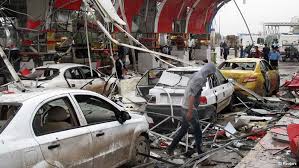 A suicide car bomber set off his explosive-laden vehicle at a security checkpoint Sunday in southern Iraq, the deadliest of a series of attacks that killed 42 people, officials said. The violence, which comes a few weeks before scheduled elections, is the latest by insurgents bent on destabilizing the country.

The blast struck the entrance of the city of Hillah during morning rush hour as dozens of cars waited to be searched. The explosion killed 21 civilians, including a woman and 12 year old, and 15 security personnel, two police officers said. It wounded at least 115, they said.

The bombing set dozens of cars ablaze, killing those trapped inside. Debris littered the ground, covered by foam sprayed by firefighters trying to extinguish the fire.

Hillah, a Shiite-dominated city, is located about 60 miles (95 kilometers) south of the capital, Baghdad.

Security forces and civilians inspect the site of a massive bomb attack in Hillah, about 60 miles (9 …

Medical officials confirmed the casualty figures for all the attacks. All officials spoke on condition of anonymity as they were not authorized to release the information.

Iraq has seen a spike in violence since last April, with the death toll climbing to its highest levels since the worst of the country’s sectarian bloodletting in 2006-2008. The U.N. says 8,868 people were killed in 2013, and more than 1,400 people were killed in January and February of this year.

No one immediately claimed responsibility for the attacks, but they bore the hallmarks of an al-Qaida breakaway group that frequently uses car bombs and suicide attacks to target public areas and government buildings in their bid to undermine confidence in the government.

Iraq is to hold its first parliamentary elections since the U.S. troops’ withdrawal in late 2011 in April.