Iraq fires those behind forcing MEA flight to return 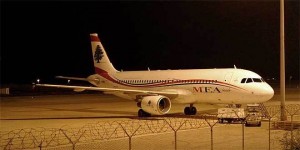 A Baghdad-bound Middle East Airlines flight was forced to return to Beirut 20 minutes after takeoff Thursday, because the son of Iraqi transport minister Hadi al-Amiri who failed to board on time despite repeated announcements over the airport’s PA system.

In Baghdad, Ali Musawi, the adviser to Iraq’s Prime Minister Nouri al-Maliki, said the premier ordered those behind the decision to force the MEA plane to turn back to Beirut fired. He also formed a committee to investigate and ordered the passengers involved to be flown to Iraq aboard an Iraqi Airways flight for free.

MEA administration was informed by its station manager in Baghdad twenty two minutes into the flight that the Iraqi authorities would not permit the plane to land in Baghdad International Airport if al-Amiri’s son Mahdi was not on board, National News Agency reported.

Maliki’s adviser said the MEA plane turned back because of maintenance work on the runway.

Hadi al-Amiri is the head of the Badr Organization, which which was the military wing of the Supreme Islamic Iraqi Council (SIIC) of Iraq.

Amiri fought on the side of the Iranians, as part of the Badr Brigade, during the Iran-Iraq War.

As leader of the Badr Organization, Amiri had a very close ties to the Iranian leadership, and in particular the Islamic Revolutionary Guards which was responsible for training the Badr Brigade during Saddam Hussein’s rule.

He is also a member of the Iraqi parliament under the United Iraqi Alliance list, which mainly represents religious Shiite parties.

In addition to his close relations with the Iranian regime and specially Qassem Suleimani ( the Commander of Quds Force, a division of the Islamic Revolutionary Guard Corps) he is a principle ally of Iraqi prime minister Maliki.