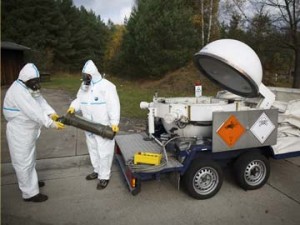 Munster, Germany- Behind barbed wire fences at a top-security site in a German forest, workers in hazard suits will soon destroy remnants of Syrian chemical weapons of a type first tested here during World War I.

Far from the battlefields of the three-year-old Syrian war, this remote high-tech facility, which usually destroys munitions from two world wars, will help eliminate mustard gas stocks from the arsenal of President Bashar al-Assad.

The facility known as GEKA, Germany’s state-owned company for disposing of chemical warfare agents, boasts incinerators and a blast-proof explosives furnace that can safely detonate munitions with the destructive power of two tonnes of TNT.

“It’s not an adventure playground,” a GEKA spokesman quipped Wednesday to journalists visiting the site, where the faint smell of mustard gas-contaminated soil in bags wafts through storage halls. “You wouldn’t hold a children’s birthday party here.”

About 140 staff work on the site adjacent to a military training ground, from where rifle shots echo through the cedar woods.

It was at this site in Munster, some 70 kilometres (50 miles) south of Hamburg, that Germany developed chemical weapons during World War I and first test-fired mustard gas, a devastating warfare agent.

“It attacks the skin and causes blisters and wounds, and it is strongly carcinogenic,” said GEKA chief Andreas Krueger. “If you breathe in a lot, it attacks the lungs and mucous membranes including the eyes.”

As GEKA helps eliminate Syria’s chemical weapons, he said, “you do think about how, after 100 years since the start of World War I, they are still a problem”.

“But you also remember that the OPCW (Organisation for the Prohibition of Chemical Weapons) and thus this entire effort won the Nobel Peace Prize last autumn. That’s a certain incentive and also a source of pride if you’re involved, even in a small way.”

A century has passed since lethal poison clouds first maimed and killed soldiers in the trenches of Europe, but the horror of the indiscriminate killer has not been consigned to history.

The world was shocked by YouTube footage, purportedly taken after the attack, that showed men and children in spasms and pain, eyes flickering and foaming at the mouth.

The Syrian opposition, along with the US, EU and Arab League, blamed the attack on Assad forces, a claim denied by the regime and its ally Russia.

Under threat of US military strikes, the Assad regime agreed to sign the Chemical Weapons Convention and hand over its 1,300-tonne stockpile for destruction by mid-2014.

The lethal material is to be destroyed under the supervision of the UN and OPCW, but several interim deadlines have since slipped and frustrated Western powers accuse the regime of stalling.

The weapons handed over by Syria will be neutralized aboard the US warship MV Cape Ray in the Mediterranean Sea.

Germany, along with Britain, has offered help with disposing of the secondary waste, so-called hydrolysates, which are similar to industrial waste.

Some 370 tonnes of the waste will be shipped in coming months in about a dozen containers to the German plant, where it will be pumped into a 1,000-degree-Celsius (1,800-degree- Fahrenheit) incinerator.

The area near GEKA has been heavily contaminated since 1919, when an explosion obliterated everything in a three-kilometre (two-mile) radius.

In World War II the area was again used for chemical weapons research and production, only to be later destroyed by British occupation forces after 1945.

The German army took over in the 1950s and has since been dealing with the legacy of two world wars, which have left the soils contaminated and littered with unexploded ordnance.

Munitions are still found here, screened with mobile X-ray units and taken away in round blast-proof metal containers on wheels.

Warfare agents are then separated from explosives and detonators, a process handled with remote-controlled saws and drills under jets of water, and then burnt for eight to 12 hours.

Foreign Minister Frank-Walter Steinmeier in January announced that Germany would lend its expertise to help in the destruction of Syria’s chemical weapons, saying that “the international community has an obligation to ensure they are destroyed”.

Photo: Picture taken on October 30, 2013 shows employees in protective gear unloading a dummy grenade during a demonstration in the chemical weapons disposal facility at GEKA.