Geagea: Lebanese are fed up with Hezbollah's behavior 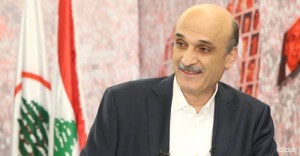 Lebanese Forces leader Samir Geagea defended President Michel Suleiman ‘s stance with regards to the ministerial policy statement stressing that this reflected the opinion of the majority of the lebanese people .

In an interview with al-Mustaqbal newspaper which was published on Monday Geagea said: Suleiman “said what he had to say last Friday on all our behalf.”

His remarks “reflect the viewpoint of the majority of the Lebanese who are fed up with Hezbollah’s behavior and practices at the strategic, military, security, political and media levels,” Geagea said.

Geagea blasted Hezbollah’s harsh rhetoric and said the Lebanese are fed up with the party’s practices, which contradict the authorities of the state institutions.

” Hezbollah considers the supreme leader of Iran as the head of the Lebanese state and that our situation in Lebanon should be a copycat of Iran,” he said about the Iranian backed Shiite militant group.

Geagea’s comments come after Hezbollah on Saturday slammed President Michel Suleiman over his recent comments during a speech at the University of Kaslik in which he insisted on making the Baabda Declaration the basis of the new cabinet’s policy statement and equated the (Baabda) Declaration to the National Pact.

“With all our due respect to the presidency and what it represents, the latest speech delivered Friday makes us believe that the Baabda Palace has recently been in need of special care, since its occupier cannot differentiate anymore between gold and wood,” the Hezbollah statement said.

This was in direct response to Suleiman’s advise against” clinging to inflexible and outdated wooden formulas that hinder the drafting of the ministerial statement.”

In a quick reaction via Twitter to Hezbollah’s attack, President Suleiman stated on Saturday that what Baabda Palace needs is acknowledging the unanimous consensus over the Baabda Declaration that was reached inside its premises.

“Hezbollah considered the president’s move as a rebellion, that’s why it had to make the crucial remarks against him,” Geagea said.

Hezbollah does not recognize the legitimate Lebanese institutions and seeks to “undermine them when they try to practice their authorities,” Geagea added.

Asked whether a mysterious drone was still flying over his residence in Maarab, Geagea said: “The drone comes as part of practices that prevent freedom of speech in this country.”

Tension between Suleiman and Hezbollah escalated on Sunday. According to media reports Hezbollah was seeking to prevent any attempts to renew his presidential term .

Suleiman’s term ends in May 2014, but the constitutional period to elect a new head of state begins on March 25, two months prior to the expiration of Suleiman’s mandate.