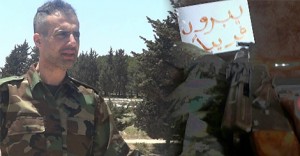 NABATIYE, Lebanon — The insults and threats flow to the singer, Ali Barakat, around the clock. Men call from unknown phone numbers and say nasty things about his mother. Others send him photos of dead bodies and tell him to join them in the grave. Still others threaten to dispatch car bombs and suicide attackers.

It all started when Mr. Barakat, a 33-year-old supporter of the Lebanese militant group Hezbollah, posted online a rousing new anthem of his, calling on the group to defeat its rebel foes in a battle near the Lebanese border in a Syrian town called Yabroud.

The soldiers are coming

they will give you dark days.

O Hezbollah, God be with you

seal your victory in Yabroud.

Since its release, the anthem has, perhaps predictably, become yet another flash point in the Syrian civil war. Those backing the government of President Bashar al-Assad have spread it on social media. Rebels and their supporters have recorded their own musical rejoinders and accused Mr. Barakat of sectarian incitement.

This new musical front in the bloody civil war underlines just how much the conflict in Syria has inflamed sectarian tensions in the Middle East and even permeated the cultural realm. Where Sunni and Shiite singers once aimed their barbed lyrics at Israel, they now increasingly target each other.

“We flattened the army of the Jews,” Mr. Barakat sings, “and now it is your turn in Yabroud.”

The most inflammatory response is an equally rousing tune that tells Hezbollah fighters to dig their own graves and threatens bomb attacks against areas in Lebanon that support the group, warning them to expect “body parts with no heads.”

The sudden interest in Mr. Barakat’s latest song has significantly raised the singer’s profile, a fact he appears to relish even though much of the attention is expressed in the threats and insults that make his cellphone perpetually ring and buzz.

“Imagine, 24 hours a day, you reject calls from the same number and the guy keeps calling,” Mr. Barakat said during an interview in his studio in this town in southern Lebanon.

Dressed in jeans, a plaid shirt and a tan sport coat, with a trimmed beard and salt-and-pepper hair, Mr. Barakat swiped through scores of angry messages on his phone, smirking at the tenacity of his enemies. He would block their numbers on one chat program only to see them pop up on another. Then he would block them again, only to find the same person attacking him on Facebook.

“If you don’t answer him, he tries to provoke you and sends photos of himself killing someone,” he said. “At 2 a.m., the phone rings, so I put it on silent and set it aside, and when I wake up in the morning, I have 100 missed calls.”

Mr. Barakat’s musical career has in many ways reflected the changes in Hezbollah over the years.

He sang his first anthems for the group when he was a student, he said, and became one of its go-to singers because of his powerful baritone voice.

Although Hezbollah’s members are mostly Lebanese Shiites, the group was once praised across the Arab world for its unflinching anti-Israel rhetoric and the prowess of its fighters.

After Hezbollah battled the Israeli Army in 2006, photos of Hezbollah’s leader, Hassan Nasrallah, were often carried in Sunni protests or displayed in Sunni homes.

Mr. Barakat, too, had a broad fan base.

But Hezbollah’s reputation as the vanguard of “resistance” against Israel took a blow after it sent fighters to support Mr. Assad against a predominantly Sunni rebel movement.

While Hezbollah says it intervened in Syria to fight terrorists who threaten everyone in the Middle East, many Sunnis in Syria and elsewhere came to see the group as an enemy of their sect.

Mr. Barakat’s repertoire shifted accordingly, as he added Syria-related anthems, praising Hezbollah for defeating rebels in the border town of Qusayr and urging them to defend Shiite religious sites. The song that drew the most notice, however, was about Yabroud, a Syrian town near the Lebanese border that had seen large battles recently as government forces and Hezbollah fighters tried to seize it from rebels.

Mr. Barakat said he got the idea for the song during a trip to Syria when he heard Hezbollah fighters preparing to fight in Yabroud. He returned to Lebanon, where his friends wrote the music and lyrics and he recorded the song in his studio on the second floor of a shopping center, above a men’s formal-wear shop and a rotisserie chicken restaurant. The whole process took about a day, he said.

The resulting song curses the rebels as terrorists and “takfiris,” or extremists who consider other Muslims infidels, and calls on Hezbollah to vanquish them. The accompanying video opens with a mushroom cloud rising over Yabroud, followed by a Hezbollah flag flying over the town.

The song quickly caught the attention of antigovernment activists in Syria and abroad, who considered it sectarian incitement and passed it around. Mr. Barakat said he realized he had struck a nerve when the song quickly accumulated tens of thousands of views.

Then the calls started — facilitated by the fact that he had put his cellphone number in the video to drum up business for his other line of work: wedding singer. “I thought it would spread through the fighters and the listeners who are with us and that they would get excited to go to the front,” he said. “But I never expected all of this noise.”

Rebels soon responded in kind. Fighters from an extremist group, the Islamic State in Iraq and Syria, chanted their own version, and a singer from the Nusra Front, an affiliate of Al Qaeda, sang, “May God destroy your house, how rotten you are!” and called Hezbollah’s fighters “monkeys.”

Enraged that Mr. Ali had equated the rebels with the Israeli Army, Ibrahim al-Ahmed, a Lebanese opposition singer who lives in Saudi Arabia, recorded his own song, “Dig Your Grave in Yabroud.”

Calling the group the Party of Satan, he appeared to threaten new attacks on predominantly Shiite suburbs of Beirut, known as the Dahiya, which have been bombed repeatedly.

“Your dream, your victory in Yabroud are your illusion, O Hezbollah,” he sang. “O humiliated Dahiya, wait for body parts with no heads.”

In a telephone interview, Mr. Ahmed blamed Hezbollah for starting the sectarian rhetoric.

“They circulated their song in the media, and now they get annoyed at our song?” he said. “Of course the opposition would respond. What did they expect?”

Hezbollah’s leadership has cast the group’s intervention in Syria in nonsectarian terms, and Mr. Barakat said Hezbollah officials had asked him to clarify the song’s meaning.

So on his Facebook page, where he often posts photos of himself in a camouflage uniform and carrying a rifle, he denied that his song had any “sectarian or confessional” purpose and promised to remove it from his YouTube account, although it was still there days later, when YouTube terminated his account.

Now, while writing new songs, he spends his days fielding calls, some from Hezbollah supporters who like his work but mostly from enraged partisans of the rebels.

He says his only precaution was to put his phone on silent at night so he could sleep.

“The only change is that before, it was only girls who called,” he said. “Now they are all Syrians.”