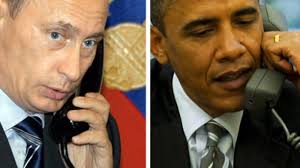 As the rest of the world watches Ukraine, so does the White House.

President Barack Obama couldn’t have been clearer when he warned Russia not to send troops into Ukraine.

Russian President Vladimir Putin couldn’t have been clearer in his response: Watch me.

And just like that, an already toxic relationship got even worse, and the two countries — and the rest of the world — veered closer to an unprecedented showdown.

The two leaders spoke Saturday for 90 minutes about the situation in Ukraine, the White House said.

Obama started his presidency pushing for a “reset” in Russian relations. Instead, Putin has essentially pulled the plug.

Critics have been complaining for years that Obama hasn’t figured out what to do about Putin, but it’s not clear there’s figuring out to do.

“I don’t think it’s a question of not being able to understand Putin,” said Steve Pifer, one of President Bill Clinton’s ambassadors to the Ukraine. “It’s a question of what tools do you have to respond.”

“Part of the problem is here is the strength of the motivations on the Russian side,” Pifer added. Putin “cares a whole lot more about losing Ukraine than the West cares about keeping it.”

When Obama issued his warning at the White House late Friday, he was relying, as he said, only on reports of troop movements in Crimea. Many of those were coming from the Ukrainian prime minister, who’d spent the day demanding Russia recall its forces, both in public statements and in an afternoon phone conversation with Vice President Joe Biden.

The White House woke up Saturday morning to more definitive news: Putin asked for, and received, approval from Parliament for “using the armed forces of the Russian Federation on the territory of Ukraine pending the normalization of the socio-political situation in that country,” according to an Associated Press translation of his request. The upper house of Parliament also recommended the recall of the Russian ambassador to the United States in retaliation for Obama’s comments Friday.

For hours after the Parliament vote Saturday, the White House stayed silent, trying to figure out what to do next. For now, no one seems to know the answer, though after a national security team meeting Saturday afternoon that a White House official said Obama did not attend but Biden joined by video conference from Arizona, Defense Secretary Chuck Hagel spoke with his Russian counterpart Saturday to talk about the lack of American military movement.

Obama was on the phone with various world leaders during the meeting and was later briefed by National Security Adviser Susan Rice, the official said.

For personal, geopolitical and domestic reasons, Putin is determined to assert Russia’s place as a major global power, and facing off with an American president only helps that. As long as he’s around — and he’s just 61 years old, and has already figured out how to maneuver around his country’s constitution to stay in control for 14 years straight, so he’ll probably be around a while — this isn’t likely to change.

Obama, of course, has his own personal, geopolitical and domestic concerns. Those have driven decisions that haven’t helped relations, from knocking Russia for its human rights record to coyly including several open LGBT members of the American delegation to the Sochi Olympics, which Obama said “speaks for itself” when asked if it was a deliberate rebuff to the Putin-backed anti-gay laws.

That capped off the worst year of Washington-Moscow relations since the collapse of the Soviet Union. Putin let NSA leaker Edward Snowden take refuge in Russia, Obama canceled a planned bilateral summit in September and they rammed into each other over what to do in Syria, before warily — and so far unsuccessfully — saying they’d work together to try to find a resolution.

Obama’s unspoken support of the Ukrainian revolution, while completely in line with longstanding American policy, only seemed to provoke Putin more. Other American politicians arguing that Obama has never been rough enough on Putin — like House Intelligence Committee Chairman Mike Rogers (R-Mich.), who issued a statement Friday condemning Putin’s “hegemonic ambitions”—has, according to Russia experts, likely aggravated Moscow even more.

Putin and his supporters are determined to show they’re not cowed. And anyway, they remember President George W. Bush’s warnings in 2008 that there would be consequences about the Russian military involvement in Georgia, and seem to assume that the same level of nothing will come out of Obama’s threat Friday as did from Bush’s.

“Were there really consequences for the Russians in those days?” said Gene Rumer, who just finished as the national intelligence officer for Russia and Eurasia and now runs the Carnegie Endowment for International Peace’s program on the region. “Putin probably thinks he doesn’t really have any good options. But he’ll get over the reputational risk.”

Putin’s spokesman said Saturday that even after the votes, he hadn’t made a decision about whether to actually send in troops or on what to do with the ambassador.

Nonetheless, asked how worried people should be, Rumer said, “very.”

Obama couldn’t have said or done much more than he did Friday. Phrases like “deeply concerned,” “profound interference,” “clear violation” and a promise of “costs” are as rough as things get in the language of international diplomacy, and the administration adding late Friday that they were considering canceling the planned trip to Sochi for the G-8 summit in June was the next notch up.

Pifer said the only possible route forward was more economic and political retaliation.

“Nobody seriously is going to be prepared to go to war over Crimea,” Pifer said.

But America and its allies should consider the very strong move of kicking Russia out of the alliance of the world’s biggest democracies.

“Unless you begin to behave in the next 24-28 hours,” Pifer said Obama and his fellow world leaders should say together, “it’s not a question of going to Sochi, it’s going back to a G-7.”

“Russian companies and banks with business in the West will suffer as a result of reckless Putin decision. Will they speak up?” Obama’s just-finished ambassador to Russia Michael McFaul tweeted Saturday afternoon.

For now they wait, since even the faintest indication of the smallest American military movement would still be a long way off, and avoided if at all possible.

But anxieties in the region won’t wait. Ukrainian troops appear to have remained on their bases for now, though that may only be able to hold so long — and they’ve now been put on highest alert by the acting government. Plus, Ukraine shares a border with Poland, Slovakia, Hungary and Romania, all of which have clear memories of Soviet occupation, and are going to be looking for reassurances from Obama and European leaders that they’re not looking at the first inklings of a remounted Russian empire.

“Are we talking about the threat of any direct military confrontation between Russia and the U.S.? No,” Rumer said. “But this is a very tense situation, and in a purely military sense, we have to keep in mind that the United States has allied commitments one-for-all, all-for-one under the NATO treaty to four of Ukraine’s immediate neighbors.”

Still, Sen. John McCain (R-Ariz.), who’s opposed nearly every move of Obama’s foreign policy with an emphasis of his mishandling of the Putin relationship, was among those issuing another critical statement Saturday afternoon.

“Every moment that the United States and our allies fail to respond sends the signal to President Putin that he can be even more ambitious and aggressive in his military intervention in Ukraine,” McCain said. “There is a range of serious options at our disposal at this time without the use of military force. I call on President Obama to rally our European and NATO allies to make clear what costs Russia will face for its aggression and to impose those consequences without further delay.”