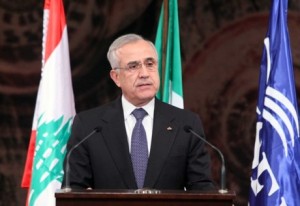 In a speech at a conference held at Holy Spirit University of Kaslik President Michel Suleiman said Friday that the Baabda Declaration is similar to the National Pact.

The National Pact is an unwritten agreement that laid the foundation of Lebanon as a multi-confessional state, and has shaped the country to this day. Following negotiations between the Shi’ite, Sunni, and Maronite leaderships, the National Pact was born in the summer of 1943, allowing Lebanon to be independent.

While the Baabda Declaration, which was adopted in June 2012 during a national dialogue session headed by Suleiman, the rival March 8 and 14 camps all agreed to distance Lebanon from regional and international conflicts. The participants also all agreed to back the Lebanese army both financially and morally as the guarantor of civil peace and national unity.

Suleiman is insisting on making the Baabda Declaration the basis of the new cabinet’s policy statement. But the Hezbollah-led March 8 alliance is insisting on adopting the so called resistance formula as the basis for the new government policy people+ army+resistance equation.

Speaker Nabih Berri, head of the Amal movement and a close ally of Hezbollah was quoted as saying : “If Hezbollah is indifferent about the resistance formula , I will insist on incorporating it in the policy statement” . He even threatened to bypass the cabinet by calling the parliament for a session to elect the president .

Suleiman also called on Foreign Minister Gebran Bassil to register the largest possible number of expatriates in order to participate in the parliamentary elections.

“It is unacceptable that only ten thousand expatriates are registered.”

Many emigrated from Lebanon and now reside in other countries.

Although there are no reliable figures, the diaspora is estimated to be around 14 million people, far more than the internal population of Lebanon of 4.3 million.