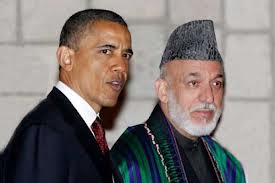 US President Barack Obama has threatened Afghan President Hamid Karzai that he is prepared to have no American troops in Afghanistan from 2015. President Obama spoke to his Afghan counterpart for the first time since a deadlock in an already agreed troop deal.

The White House said, “President Obama told President Karzai that because he has demonstrated that it is unlikely that he will sign the BSA, the United States is moving forward with additional contingency planning. Specifically, President Obama has asked the Pentagon to ensure that it has adequate plans in place to accomplish an orderly withdrawal by the end of the year should the United States not keep any troops in Afghanistan after 2014.”

President Karzai has refused to sign the BSA (Bilateral Security Agreement) that would allow between 3,000 and 15,000 foreign troops to stay in Afghanistan after the withdrawal of all coalition combat troops by the end of 2014. But, the White House also said in its statement, “We will leave open the possibility of concluding a BSA with Afghanistan later this year. Furthermore, the longer we go without a BSA, the more likely it will be that any post-2014 US mission will be smaller in scale and ambition.”

President Obama’s warning comes after the Afghan President imposed several new conditions for the BSA to be signed. President Karzai wants the US and Pakistan to re-start the stalled peace and reconciliation process with the Taliban. He has also said night raids on homes and villages, air-strikes without Afghans calling for them and drone strikes are unacceptable.

Zero option and its costs

President Karzai has been obdurate even after a Loya Jirga (A council of tribal leaders and elders) had endorsed the signing of the troop deal. No troop deal could cost Afghanistan a loss of up to 16 billion dollars a year in security and development assistance.

President Karzai had told NDTV in an exclusive interview in his Palace in December 2013, “Aggressive rhetoric will not force us to signing. We are not known as a nation to be intimidated. It’s good for them to recognise that we will sign it but when we are sure the signature will bring security and will launch a peace process for Afghanistan where Afghanistan will feel secure and good. If those guarantees are fulfilled before the election sure I’ll go ahead and allow it to be signed.” But, now with President Obama for the first time publically acknowledging the ‘zero option’ is on the table, Afghanistan, the region and the world watch whether this will lead to fresh confrontation, compromise or a cul-de-sac.