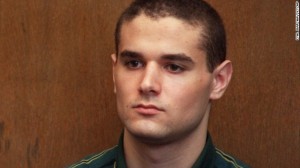 An Israeli-American prison inmate who murdered a Maryland teen was killed Sunday after he shot three guards inside an Israeli prison, officials said.

Sheinbein, 34, shot at the guards from inside the prison’s restrooms, Weizman said. Two of them were seriously wounded, and the third sustained minor injuries, she said.

It was unclear how he got the weapon.

Sheinbein, a citizen of Israel and the United States, pleaded guilty to murder in 1999 in the gruesome killing of Alfredo Tello Jr.

Prosecutors accused Sheinbein and accomplice Aaron Needle of picking up Tello from work in Silver Spring, Maryland, and deciding to kill him.

They strangled him with a rope, struck him on the head with a blunt object and slashed him. Two days later, prosecutors said, they dismembered the victim and burned his body.

After fleeing to Israel, Sheinbein admitted to the dismemberment and burning of the victim. He said Needle, who was arrested in the murder but hanged himself in jail, was the killer.

The Israeli Supreme Court had ruled that Sheinbein could not be extradited to the United States.