Update on the Hermel suicide bombing in northeast Lebanon 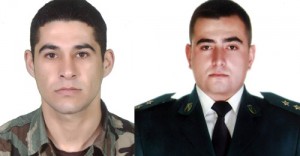 The Lebanese army provided on Sunday more details on the suicide bomb explosion that took place Saturday in the Beqaa town of Hermel .

The car involved was a black 1994 Grand Cherokee SUV.

Three people were killed in the explosion and 18 were wounded

Officer Elias Khoury( 26) who hails from the town of Zahle

Soldier Hamza al Faitrouni( 26) who hails from the town of Baalbeck.

The civilian that was killed was identified as Mohammad Deeb Ayoub

On Saturday, a suicide bomber blew himself up at a Lebanese Armed Forces checkpoint at the entrance of Beqaa’s Hermel. It was heading to downtown Hermel

This is the same organization that declared responsibility for the February 1 attack.

Al Nusra Front declared last January that all the areas in Lebanon where the Iranian backed Shiite Hezbollah militant group operates are “legitimate targets” for attack and warned the Sunnis to avoid them.

Update: Al-Jadeed ( New TV) reported that the army arrested at a checkpoint in Hermel a Syrian man with false identification cards and driving a van with fake registration papers.

Update 2: National News Agency reported that the Army Intelligence arrested on Sunday a suspected terrorist in the Bekaa region of al-Qaa.

It said that it arrested Qassem al-Atrash and that it is verifying his identity.

Voice of Lebanon radio (93.3) had identified him as Hussein Qassem al-Atrash, uncle of Omar al-Atrash, who is charged with transporting suicide bombers to Lebanon.

Omar al-Atrash, 24, who was arrested in January has also been charged with detonating bombs and explosive-rigged vehicles, attacking the army in Majdelyoun and al-Awwali bridge areas in the southern city of Sidon in December and launching rockets on Israel.

Hussein Qassem al-Atrash is suspected of having cooperated with his nephew in transporting booby-trapped vehicles to Lebanon.

Update 3- Hezbollah Nawar al-Sahili said on Sunday. “The lebanese army spared the city of Hermel a huge catastrophe, by intercepting the suicide bomber at the checkpoint ”

Photo: The 2 members of the Lebanese army that were killed in the Hermel suicide bombing. Officer Elias Khoury ( R) and Hamza al Faitrouni