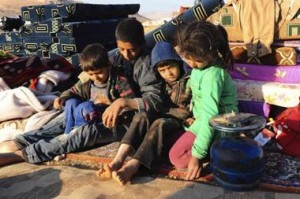 Newly arrived refugees speak of harsh and perilous conditions in Yabroud , the largest town in northern Qalamoun still in rebel hands, and the nearby villages. The strategic area north of Damascus is under heavy artillery shelling and air strikes, including barrels packed with high explosive tossed out of helicopters, known as barrel bombs. Electricity and phone lines are down and food supplies are running out.

“No one can hide from what they are using against us. Only God protects us,” says Ali Harkoum from the village of Sahel, three miles north of Yabroud, who arrived in Arsal last Sunday.

Mr Harkoum stood over a hospital bed where his brother, Mohammed, was recovering from severe wounds received when his car was hit by an anti-tank missile as he left Yabroud. Of the three passengers, only he survived. The missile blast severed three of Mohammed’s fingers and caused burns and lacerations to his head, arm, and chest.

According to the United Nations refugee agency, an estimated 10,000 Syrians have arrived in Arsal from Qalamoun since Feb. 10, when the Syrian Army renewed its assault on the mountainous region between Damascus and Homs. Refugees in Arsal estimated that around 80 percent of the population in the villages near Yabroud have fled to Lebanon. Arsal’s pre-war population of some 38,000 has tripled in the past two years from the influx of refugees, placing enormous strains on the Sunni-populated municipality.

Some of the injured rebels and civilians are being treated at the Al-Rahman hospital, which opened only 25 days ago. By necessity, most of those treated are outpatients: the hospital set up in the basement of a partially-built building has only five beds.

“The Syrian crisis could last a long time, so this hospital is an important base on which to build. We are building a second floor and buying cots for children,” says hospital administrator Dr. Bassam, who is from Yabroud. He asked that his family name not be used to protect relatives still inside Syria.

Dirt tracks to a sanctuary

Lying in one of the beds is Abu Muatassam, a rebel fighter from Qarah in north Qalamoun, who was injured when his car was ambushed by Syrian soldiers and fighters from Hezbollah, the Lebanese Shiite militant group. “The car flipped over and I hurt my head and back,” he says.

The refugees reach Arsal via dirt tracks that snake across the rugged border through a desolate, arid landscape. Although the trails still remain open, traveling along them incurs the risk of attack by missile-firing helicopters or an ambush with anti-tank missiles.

“When I left Yabroud, we kept the car doors open and broke all the lights. I told everyone in the car that if they see a red light heading toward us to jump out of the car immediately,” says Bassam, referring to the glow from the tail of an incoming missile.

Abu Omar, a resident of Arsal who provides support to Syrian rebels, says he has made several dangerous trips to Yabroud lately to evacuate casualties.

“I brought in one wounded man yesterday whose body was so full of shrapnel that it would have broken the needle of a syringe if someone tried to inject him,” he says.

Arsal is not exactly a safe haven. Shortly after the interview with Abu Omar, a Syrian helicopter fired missiles, allegedly at a convoy of armed men on the outskirts of Arsal, wounding one person. The helicopter attack was the second in the Arsal area in the past week.

Despite the rigors of combat at the Qalamoun front, Abu Muatassam says he will return to his rebel unit when he has recovered from his injuries. He harbors deep anger toward Hezbollah, which is fighting in Syria on behalf of the regime of Syrian President Bashar al-Assad.

“It is true that Hezbollah has experience in fighting, but the difference between us is that we are fighting on our land and in our country,” Abu Muatassam says. “Hezbollah is occupying our country and that’s why we will fight to the death.”