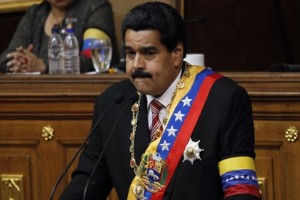 Massive demonstrations by opponents and supporters of President Nicolas Maduro were underway Saturday in central Caracas as the official death toll rose to eight on the 10th day of civil unrest roiling Venezuela.

Leading the opposition demonstration in eastern Caracas was Liliana Tintori, wife of Leopoldo Lopez, the former Caracas borough mayor who was arrested last week and charged with inciting violence that by official count has also led 137 injuries. Lopez and other opposition leaders say armed pro-government vigilantes have been responsible for the deaths.

Lopez is being held in Ramo Verde military prison where he continues to send messages to supporters urging continued demonstrations. In an interview with Bogota’s El Tiempo newspaper published Saturday, Tintori said government officials had urged Lopez to go into exile rather than give himself up for arrest.

The focus of the opposition demonstration Saturday is a demand that Maduro disarm groups of motorcycle-borne vigilante groups who opposition leaders claim are responsible for the violence. Henrique Capriles, the oppositon presidential candidate who lost to Maduro last April in a special election to replace the late Hugo Chavez, was attending the demonstration.

Prior to his death last March, Chavez admitted to distributing firearms to members of paramilitary militias to safeguard his Bolivarean Revolution.

Tens of thousands of marchers, mostly dressed in white to symbolize nonviolence, were filling the streets of Marquez barrio of eastern Caracas. Because police and national guardsmen have blocked off several roadways in the area, leaders called for anti-government demonstrators to merely gather and not march at designated areas of Caracas and other cities across Venezuela.

Meanwhile, thousands of female supporters of Maduro, mostly dressed in red caps and shirts, gathered in Morelos Plaza in central Caracas to march to Calvario Park near Miraflores presidential palace in a show of support for government measures last week.

Rising violence was reported Friday in western Tachira state, where Maduro called out extra forces in armored vehicles to quell the disturbances. Oil and mining minister Rafael Ramirez threatened Friday to withhold supplies of gasoline in areas of protests unless government opponents ceased their demonstrations

Also on Friday night, the sound of protesters clanging on pots and pans could be heard throughout much of the city in mass “cacerolazo,” as the form of protest is known in Spanish.

Late Friday, Atty. Gen. Luisa Ortega Diaz, said that among the dead, four were killed in Caracas and the rest in other states. Hundreds attended the funeral on Friday of one of the victims, former beauty queen Genesis Carmona, 23, who died Wednesday from a gunshot wound to the head days after an anti-government march in Valencia in central Venezuela.