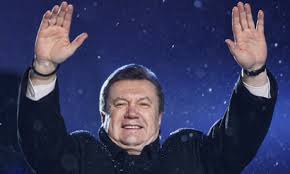 Ukraine’s President Viktor Yanukovych appeared to be gone from the capital Saturday. His living quarters were emptied out; in parliament an opponent pushed for his immediate resignation, and responsibility for his office was handed off to an old rival.

Change appears to be gripping the country swiftly.

At the presidential residence in a Kiev suburb, groundskeepers and gate personnel kept watch over living quarters that were emptied out.

Gone were the Ukrainian President’s guards. And opposition leader Vitali Klitschko said Yanukovych had left town, a day after he signed a landmark peace deal with his opposition.

“Unfortunately, President Yanukovych who did not hear the people has withdrawn from his constitutional duties himself. And today he has already left the capital. Millions of citizens see only one option in the current situation- – it is calling the early presidential election,” Klitschko said

The President’s residence, government buildings, protest gatherings, the central city were devoid of police and of security forces that had opened fire on protesters this week, dropping many dozens of them to the ground.

As a CNN crew drove to Yanukovych’s residence, it passed checkpoints set up by protesters.

When they arrived, the gatekeepers told CNN that they were not allowing the general public onto the grounds, but they let journalists enter. The civil servants asked that the reporters treat his home as a crime scene.

Both of the President’s two living quarter buildings were empty, the crew saw, as it inspected the grounds.

When the civil servants spoke of the home, they referred to it as being the “people’s residence” once more.

Yanukovych left for Ukraine’s second’s largest city of Kharkiv for a meeting after Friday’s peace agreement, said a senior U.S. State Department official, who spoke on condition of anonymity. The official had been on the phone with Ukraine’s foreign minister.

That’s “not unusual,” the official said.

Yanukovych has strong support in the East, where many ethnic Russians live. The raging opposition he faces was triggered by his loyalty to Russia and a decision in November to turn away from a deal with the European Union.

In many parts of Ukraine, people have toppled statues of former Russian communist leader Vladimir Lenin, a founder of the Soviet Union. The communist empire had included Ukraine, and the country gained independence, after the USSR fell.

In the Rada, Ukraine’s parliament, one of Yanukovych’s chief opponents took the podium to push him out of office as soon as possible and steamroll change.

The Rada passed a resolution to free Yulia Tymoshenko, the jailed former Prime Minister and a hero of the country’s 2004 revolution. It isn’t clear whether the move is legally binding.

Opposition leader Klitschko urged lawmakers to enact a resolution calling for the President to immediately resign and calling for early presidential elections to be held by May 25.

Key Yanukovych allies left office, and the presidential duties were handed off, until a new Cabinet is selected.

During the session, resignations were announced for the speaker of parliament and another leading presidential ally.

Hours later, parliament elected a new speaker, one of Yanukovych’s stark rivals, and gave him the duty of coordinating the executive office until a new Cabinet is in place.

Another opposition parliamentarian received the duties of acting Interior Minister.

In Ukraine, neither protesters, opposition politicians nor the embattled President had gotten all of what they wanted from the deal after a week of bloodshed.

Enthusiasm was muted for the peace deal brokered among them a day before by the foreign ministers of Poland, Germany and France.

Hours before they signed the deal, Poland’s Foreign Minister Radoslaw Sikorski warned them not to expect perfection.

“All sides need to remember that compromise means getting less than 100%,” he said in a message on Twitter.

The deal takes away many of Yanukovych’s powers soon — and his office completely, before the year is up. That wasn’t soon enough for some.

Protesters who occupied Kiev’s Maidan, or Independence Square, for months and watched many dozens of fellow demonstrators die this week had wanted him out of office.

If the President has fled, that wish may have already been fulfilled.

And on Friday, the Rada, rolled up its sleeves to accelerate the implement the agreement.

First, they tackled the section designed to limit the President’s power and roll back the Constitution to what it had been in 2004.

The deal also requires presidential elections “as soon as the new Constitution is adopted but no later than December 2014.”

They also called for an investigation into this week’s violence and handed police, per the agreement, more restrictions on the use of force. Over the weekend, protesters are also to turn in their illegal weapons and withdraw from streets and public buildings.

Early Saturday, a large crowd gathered in the square for funeral ceremonies.

The night before, after the deal was announced, demonstrators held a procession to remember their dead that night. Pallbearers carried coffins over the heads of a throng of people holding up lights in their honor.

Pavel, a demonstrator who identified himself only by his first name, said he’d helped carry away people with bullet wounds Thursday, when protesters died en masse after shots rang out.

Pavel said on Friday that he won’t forget his fallen compatriots, nor will he give up the fight.

“As long as (Yanukovych) is president,” he said, “the movement will continue.”

But other protesters showed some support for the deal. Its announcement before the crowd at Independence Square on Friday drew some cheers.

And when Klitschko, who has acted a spokesman for the movement, took the stage Friday, he got a notably frostier reception.

He contended that the government was trying to divide the protesters with the deal.

He walked off to a handful of jeers.

The wave of unrest began in November, when Yanukovych scrapped a European Union trade deal and turned toward Russia.

The country is ethnically split, with many ethnic Russians living in the East. The rest of the country comprises mostly ethnic Ukrainians.

Russia, which has offered to lend money to cash-strapped Ukraine in a deal worth billions of dollars and to lower its gas prices, has put pressure on Yanukovych to crack down on demonstrators.

Western leaders, who have offered Ukraine a more long-term aid package requiring economic modernization, urged the President to show restraint, open up the government to the opposition and let the democratic process work out deep-seated political differences.

But the fight was also about corruption and control. The opposition called Yanukovych heavy-handed, with Klitschko and others saying protesters wouldn’t leave Maidan until he resigned.

Tensions boiled over Tuesday, when security forces charged into a Kiev crowd with stun grenades, nightsticks and armored personnel carriers. At least 26 people — protesters and police alike — were killed.

But on Thursday, protesters pursued police as they withdrew. Security forces fired back, sending dozens of protesters tumbling to the ground.

Then came the landmark agreement Friday.