Syria offers to cooperate with Lebanon on terrorism 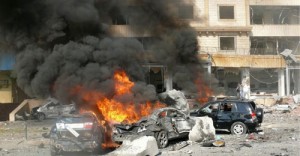 The Syrian Interior Ministry announced in a statement on Friday that it is ready to cooperate with the Lebanese authorities on counter-terrorism measures.

“The Ministry is ready to cooperate with the Lebanese Interior Ministry on counter-terrorism measures, as well as on pursuing terrorists and intercepting criminal tools used in targeting the stability of Lebanon and Syria,” the statement issued on Syria’s state news agency SANA said.

“The Ministry is also ready to offer all that is possible to thwart the terrorist attacks that target the security of the brotherly Syrian and Lebanese people.” The statement added

The Syrian regime always refers to the rebels as terrorists

The statement by the regime comes two days after two suicide bombers blew up their cars near an Iranian cultural center in the Hezbollah stronghold of Bir Hassan, south of the capital Beirut killing at least 12 people and injuring dozens including children in an orphanage, in the latest attack targeting Shiite areas in Lebanon.

An al-Qaida-linked group claimed responsibility for the bombings, saying they were in retaliation for Hezbollah’s involvement in the Syrian war alongside President Bashar Assad’s forces. The Shiite militant organization is backed by Iran.