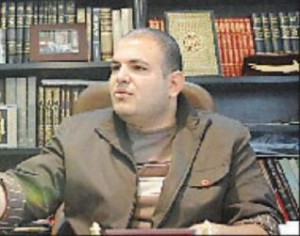 The Arab Democratic Party which is closely allied  with  the Syrian  regime of president  Bashar al Assad   issued a 48-hour ultimatum to Lebanese authorities Thursday following the assassination of of its  official Abdul Rahman Diab in the  city of Tripoli in northern Lebanon .

Secretary-General Rifaat Eid said if Diab’s killers were not arrested by the deadline we will deal firmly with the issue and let Tripoli bear the consequences.”

“We can’t remain silent anymore. If the government doesn’t arrest the killers  within  48 hours, Tripoli will be directly targeted,” Eid warned.

Diab, a resident of the mostly Alawite Jabal Mohsen neighborhood, known also as Aboudi Nwasi and father of mosques bombing suspect Youssef Diab was gunned down in his car by an unidentified motorcyclist   along the coastal Mina highway at dawn on Thursday , according to local reports.

As the news of Diab’s  death spread across Jabal Mohsen, ADP fighters began sniping at the rival neighborhoods of Mallouleh and Mankoubin.

Two men were shot dead by sniper fire following the fatal shooting of the ADP official. Five other people, including a woman, were also wounded, the sources said. They were also taken to the Islamic Hospital.

Among the fatalities was Mohammad Jamal, a truck driver.

Sunni militia leaders, who have engaged in intermittent clashes with the ADP, appeared to try and diffuse the situation, calling on young fighters to withdraw and allow the Army to contain the situation

“We call on all our youth not to slide into the battle and let the Lebanese Army respond to the attacks,” a statement signed by Saad Masri on behalf of all local militia leaders said. “We ask all our youth at the battle fields not to be dragged into a battle that serves the Syrian regime and Hezbollah, and inflicts material and physical losses for us.”

“Let the Army defend the innocent citizens,” it concluded.

Prime Minister Tammam Salam denounced the assassination and instructed the Lebanese Army to act “quickly and decisively” to apprehend the perpetrators, vowing “zero tolerance” for any attempts to undermine Tripoli’s security.

The Lebanese Army responded by firing back at the source of sniper fire. Troops also closed the targeted road.

By mid-morning, almost all public and private schools across Tripoli had shut down over fears the security situation could deteriorate.

The Lebanese University also cancelled all exams scheduled for Thursday in the wake of the violence.

Diab was a senior official in the Arab Democratic Party in charge of “military” affairs, according to AFP

Diab’s son Youssef ,who admitted to parking a booby-trapped car that exploded near al-Salam mosque was detained following bombings last August and has been charged along with several others in connection with the bombings of the two mosques in Tripoli.

Diab’s son Youssef was arrested in October in  connection with the Aug. 23 attacks on the Al-Taqwa and Al-Salam mosques, which killed 47 people and wounded more than 300 more.