At Least 25 killed in Quadruple Bombing in Baghdad 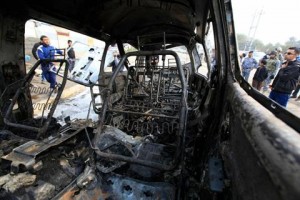 The quadruple bombings appeared to be the latest in a wave of Sunni radical mayhem that has proliferated in Iraq and is playing an increased role in the war in neighboring Syria.

In western Iraq’s Anbar Province, an incubator of Sunni radicalism, the police said a suicide bomber killed a police officer and wounded eight others at a checkpoint near the house of an important tribal leader who has allied with the Shiite-led government in Baghdad to fight Al Qaeda militants in Anbar.

The rise in Sunni radical militance has been tied in part to a series of daring but little noticed breakouts from Iraqi prisons that has freed hundreds of hardened jihadists who are now among the leaders and foot soldiers of the Sunni groups operating in neighboring Syria and in Iraq itself.

The prison breakouts partly reflect the breakdown of authority in Iraq since the United States military departed in 2011.