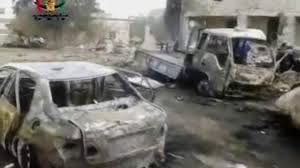 A car bomb blew up outside a mosque in a rebel-held village in southern Syria as worshippers were leaving after Friday prayers, killing dozens of people and filling clinics and hospitals with the wounded, anti-government activists said.

The explosion in Yadouda charred vehicles parked nearby and damaged the mosque, which has a white dome, according to video images posted by activists who are fighting to oust President Bashar Assad.

Yadouda is in the southern province of Daraa, the birthplace of the uprising against Assad that began with peaceful protests in March 2011 and morphed into a civil war that has killed more than 130,000 people.

The motive for Friday’s blast could not immediately be determined and activists provided varying death tolls ranging from 29 to 43. State-run TV confirmed the bombing but said only 3 people were killed.

Car bombs have frequently been used by Islamic extremists both against the government and against moderate rivals in the Sunni-led opposition movement. Government forces also have been known to use explosive-packed vehicles and the two sides frequently trade blame in attacks targeting mosques.

An activist in the nearby region of Quneitra, Jamal al-Golani, said the car bomb killed at least 29 people of which 18 were identified. He gave The Associated Press a list of the names of the identified men who were killed.

The Britain-based Syrian Observatory for Human Rights, which uses a wide network of local activists to track violence in the country, said 32 people were killed, including a child and 10 rebels.

Another activist in Daraa, Ahmad al-Masalmeh, gave a death toll of 43. He said the car bomb blew up next to a tanker truck filled with diesel causing a large fire and burning “some bodies beyond recognition.” The mosque is known as Ammar bin Yasser, although some people refer to it as al-Baraa bin Thabet, al-Masalmeh said.

Clinics in the village and nearby areas were full of wounded people and there were calls over loudspeakers for residents to donate blood. Al-Masalmeh added that some of the wounded were taken across the border to Jordan for treatment.

“Hospitals are overwhelmed with the wounded,” the man said via Skype.

Videos posted by activists online showed several charred vehicles outside the damaged mosque with a white dome. The video appeared genuine and corresponded to other AP reporting of the events.

Earlier Friday, the United Nations paused the evacuation of civilians from the embattled Syrian city of Homs, a senior U.N. official said, while the government screened military-age men who had left the area.

Meanwhile near Lebanon, Syrian forces and rebels clashed over the strategic town of Yabroud, causing hundreds of people to flee over the border.

The pause in evacuations came just a day after a cease-fire was extended for three more days in Homs. Hundreds more civilians are believed to still be trapped in a rebel-held medieval quarter known as Old Homs.

World Food Program director in Syria Matthew Hollingworth told the AP by telephone from Damascus that several dozen men who left Old Homs during earlier evacuations, were being held in a school elsewhere in the city and being questioned by Syrian authorities. U.N. officials were present at the school, he said.

“The agreement has been we will now concentrate on the process of completing the regularization of status of the men from 15 to 55,” Hollingworth said. “Only when that’s done, will we look at another evacuation.” Later in the day however he said the U.N was not linking the next evacuation to the men’s release.

The Syrian government considers men of military age to be potential combatants who must obtain security clearance before being released. Those suspected by authorities of being rebels will likely be detained.

The men being held in the school were among 1,400 people evacuated by the U.N. and the Syrian Red Crescent from opposition-held areas of Homs over the past week as a fragile truce took hold between forces loyal to Assad and armed rebels.

In all, more than 400 men from Homs have surrendered to Syrian forces, and around 200 have been released, according to an AP tally.

Hollingworth said men seeking evacuation understand they will have to be present themselves to Syrian security forces.

Also Friday, Syrian troops and rebels clashed around the rugged hills surrounding the town of Yabroud — the last rebel stronghold in Syria’s mountainous Qalamoun region. Syrian aircraft fired shells toward farmlands close to the town and clashes broke out in the nearby town of al-Sahel, said local activist Nader al-Husseini.

Plumes of smoke rose from the nearby hills on footage broadcast by the Lebanon-based television station al-Mayadeen. The station’s correspondent said Syrian forces had seized the Marsad hill overlooking the town in a new blow to rebels.

Backed by Lebanon’s Hezbollah fighters, the Syrian army has been on a crushing offensive in the region since early December, trying to sever a main thoroughfare for rebels from Lebanon.

In the northern city of Aleppo, rebels blew up part of the once-luxurious Carlton Hotel, where soldiers were stationed, by tunneling underneath the sprawling building and planting explosives, the Observatory’s Rami Abdurrahman said. Abdurrahman said five soldiers were killed, while the government news agency SANA said soldiers repelled an attack at the hotel but gave no other details.

At U.N. headquarters in New York, Security Council experts met Friday to start what are expected to be difficult negotiations on a resolution demanding immediate humanitarian access to all areas of Syria. A Western and Arab-backed text threatens sanctions if demands aren’t implemented within 15 days, but a rival Russian text doesn’t mention sanctions or any kind of enforcement.

Lithuania’s Foreign Minister Linas Linkevicius, whose country holds the Security Council presidency, said he believes international pressure and Russia’s hosting of the winter Olympics had a role in Moscow proposing its own draft resolution after rejecting the Western and Arab text.

“The question is to what extent we can reach a compromise,” said Linkevicius, who strongly backs inclusion of a sanctions threat. “I heard some signals of positive outcome.”