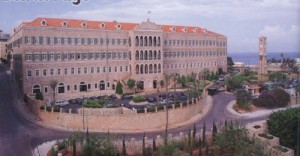 The Hezbollah militant group threw another monkey wrench into the cabinet formation process on Friday when it rejected the appointment of former Internal Security Forces chief Ashraf Rifi to the position of Interior Minister.

This development comes amidst reports that PM designate Tammam Salam was planning to visit the Baabda palace Friday morning to jointly announce with president Michel Suleiman the birth of the new cabinet.

Salam reportedly postponed his morning meeting with Suleiman to the afternoon in order to give rival groups more time to overcome the remaining obstacle over the Interior Ministry portfolio, according to local reports

Caretaker Social Affairs Minister Wael Abu Faour who has been trying to coordinate with the rival groups the cabinet formation on behalf of MP Walid Jumblatt’s parliamentary bloc is expected to hold talks with Salam later in the day to discuss recent developments.

The Future Movement announced its intention to name Rifi for the post during a 2.30 a.m. phone call to Salam, who in turn contacted Speaker Nabih Berri about the decision, the sources said. Berri informed Salam of the Hezbollah’s refusal, while Future Movement leader Saad Hariri affirmed that he was intent on Rifi taking the Interior Ministry.

The Future Movement accused Hezbollah of being behind the failed attempt to form the cabinet. According to sources all the rival groups including FPM, PSP, Berri, Suleiman and Salam agreed that Rifi should be the interior ministry but Berri could not deliver Hezbollah’s OK at the 11th hour.

Rifi is seen as a controversial figure by the Hezbollah-led March 8 coalition. Salam was appointed in April 2013, days after the cabinet of PM Nagib Mikati collapsed over extending Rifi’s mandate and the subject of establishing a committee to oversee the parliamentary elections.

Under the compromise, caretaker Energy Minister Gebran Bassil will be allotted the Foreign Ministry, while Tashnag MP Arthur Nazarian will replace Bassil. Bassil will also double as acting energy minister, according to the deal.

Nazarian belongs to the parliamentary Change and Reform bloc which is headed by MP Michel Aoun. The Hezbollah led March 8 alliance had insisted the Energy portfolio remain in the hands of Bassil, Aoun’s son-in-law.

The March 8 coalition, Future Movement, and MP Walid Jumblatt’s Progressive Socialist Party agreed last month on a deal to form an all-embracing Cabinet based on 8-8-8 Cabinet lineup in which eight ministers are allotted to the March 8 and March 14 coalitions each. The rest of the ministers are to be named by the president, the prime minister-designate and Jumblatt who jointly form the so called centrist bloc.