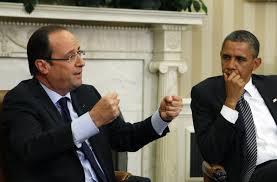 In an appearance with French President Francois Hollande at the White House, Obama said the threat to civilians in Syria and to the broader Middle East continues to worsen.

“Right now, we don’t think there’s a military solution per se to the problem…. The situation is fluid, and we are continuing to explore every possible avenue to solve this problem,” he said. “Because it’s not just heartbreaking to see what’s happening to the Syrian people, it’s very dangerous for the region as a whole, including friends and allies and partners like Lebanon or Jordan.”

The Obama administration has repeatedly reviewed options for taking military action or stepping up aid to moderate rebel groups in Syria and decided that providing only limited aid is the wisest course. But the increasing carnage and the rising flow of refugees have continued to raise the pressure on the White House.

“I always reserve the right to exercise military action on behalf of America’s national security interests,” Obama said, adding, “That has to be deployed wisely.”

He also repeated his warnings that international business should not try to resume trading with Iran while international negotiations, scheduled to resume next week, continue over Iran’s nuclear program.

Sanctions on Iran’s economy remain, Obama said, and he warned that he would “come down like a ton of bricks” on companies that try to end-run them in hope that the economic penalties will soon be lifted.